Another stereotypical Bizarro cartoon. First, it uses the standards Plains imagery to represent all Indians. Second, it mocks Indian names, which have nothing to do with temporary emotions.

This "funny name" humor is even older than casino-based humor. I bet stage shows had Indians with "funny names" a century ago. I can just imagine the warrior Big Nose asking Chief Drinks-a-Lot for the hand of his daughter, Princess Hot-Cha-Cha.

This so-called humor is older, but it isn't any better. Cartoonists should've retired it decades ago along with jokes about Jews, Poles, and other ethnic groups.

For more on the subject, see "Funny" Indian Names and Native Comic Strips vs. Comic Books. 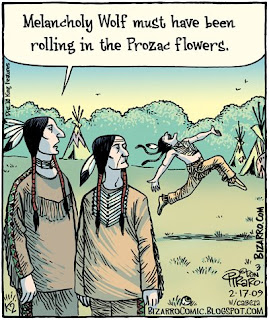