Hauser, mom may be heading for Mexico

The Brown County sheriff said they were seen in southern California and were apparently en route to Mexico for an alternative medical treatment to chemotherapy.Update:  Mother and son returned a few days later and agreed to accept whatever treatment the court may order.

For more on the subject, see Judge Says No to Nemenhah "Healing" and Hodgkin's Patient is Nemenhah "Elder." 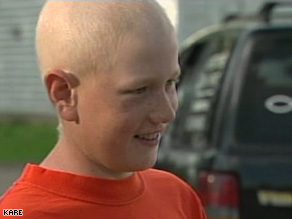