Continuing the discussion of Wounded Knee, the fifth episode of PBS's We Shall Remain series:

Here are a few random thoughts inspired by Wounded Knee.


Not this woman, apparently. Which goes to prove my point. Soldiers and football players may think of themselves as warriors, but housewives probably don't. The whole "fighting" bit is a stereotype, not an accurate reflection of modern Sioux culture.

The occupation is the exception that proved the rule. Every Lakota Indian except the few hundred at Wounded Knee did not resort to fighting. They continued to seek solutions through the usual political and legal channels.

Whenever the low point was, Indians were past it by then. With the occupation of Alcatraz, the Trail of Broken Treaties, and Nixon's legislation, they were on the road to recovery. With or without Wounded Knee II, they would've continued revitalizing their cultures.


In other words, they were forced to contribute to their own brainwashing. The song reinforced the idea that Indians were cute and childlike, not mature and sophisticated. 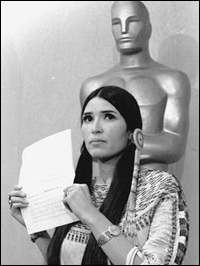