By Saeed ShabazzMore on why he was nominated:Comment:  I don't think getting Peltier out of prison is a legitimate reason for giving him a Nobel Peace Prize.

The other reasons are more legitimate...but hundreds of thousands of people must've done similar things. I doubt Peltier has done anything that makes him uniquely qualified for the award.

For more on the subject, see Peace Prize for Prisoner? 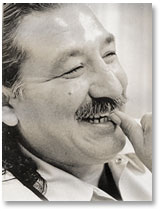 Not unless trying to kill a cop and then killing two feds counts as 'unique.' Let the shitheel die in prison.

Peltier's supporters claim he was framed and didn't get a fair trial.

More to the point, he did all his peace-loving things after he was imprisoned. If you don't believe in rehabilitation, the Nobel Peace Prize Committee may.

Peltier could win the award and still die in prison, you know. The two things aren't mutually exclusive.

By the way, keeping elderly prisoners past the usual pardon date may feel good, but it costs the taxpayers money. Releasing them to die at their own expense is more economical.

Are you willing to pay more in taxes for your "tough on crime" attitude? I'm guessing not.

What tough on crime attitude? You're projecting just a tad, I simply don't believe the 'he was framed' crap I've examined the evidence and I remain convinced that he's guilty.

"By the way, keeping elderly prisoners past the usual pardon date may feel good, but it costs the taxpayers money. Releasing them to die at their own expense is more economical."

True, I was a tad angry when I typed that (someone who actually deserves it should get the prize).

This discussion is sick. Even the government has admitted that they don't know who killed the agents. Leonard is innocent. The case has been reexamined ad nauseam by innumerable investigators, journalists, social justice organizations and lawyers. The vast, overwhelming majority consider Leonard to be innocent *and* a political prisoner.

The fact that he has endured this injustice and refused to give in to cynicism and hatred, serving Native people and communities even from the confines of his cell is what has earned him Nobel Peace Prize nominations.

Attitudes toward Leonard like that which we see from Stephen are the same as those coming from the last few holdout white supremacists who maintain that Nelson Mandela is a common criminal who should have died in prison.

That might change a lot if the government really admitted that they did not know who killed the agents (i.e. those who prosecuted and imprison him saying it is a mistake). Do you have a link or quote on this?

I checked Wikipedia and found no such quote, and they make it clear that the controversy is far from being as cut and dried as you say it is.

As for Stephen and Mandela, I'd not jump to conclusions until I knew what he had to say about Mandela.

dmarks you say: "I checked Wikipedia and found no such quote"

and that somehow is authoritative?

You barely deserve a response yourself, but since others commenting here seem to have trouble thinking, I'll point out a few things:

try a google search for the many pages that describe the case files of "Leonard Peltier"??

# Following the discovery of new evidence obtained through a Freedom of Information Act lawsuit, Mr. Peltier sought a new trial. The Eighth Circuit ruled, “There is a possibility that the jury would have acquitted Leonard Peltier had the records and data improperly withheld from the defense been available to him in order to better exploit and reinforce the inconsistencies casting strong doubts upon the government's case." Yet, the court denied Mr. Peltier a new trial.

to be clear, the FBI and Dick Wilson's squad of self-proclaimed Goons, are the guilty parties for the MANY other killings that occurred during the early 70s.

To ask that Peltier admit criminal guilt in the matter is just another example of a truly warped US gov. genocidal culture.

Not only is it not in Wikipedia, but it isn't in your summaries.

Mr. Peltier has been a model prisoner and has shown no predilection for repeat offenses. He has already served a long time for the crimes he committed. These are good reasons for parole or early release. Flimsy "cases" that he is innocent are not.

To make it more clear, your oral argument summary is not clear:

The part after the "state" is like a paraphrase or quote. In which the government attorney states that Mr. Peltier shot the agents (which of course means that the government knew he did it).

The "conceded" part of your statement contradicts this, and I wonder if it is a real quote, or someone's willful misinterepretation of the government saying it knew Peltier did it.