We get e-mail:Comment:  This t-shirt is the product of the Gators vs. Seminoles college football rivalry. It's cleverly labeled "Ur-A-Nole"--as in urinating on a Seminole.

Note that the "Seminole" is depicted as a stereotypical angry savage. He doesn't even resemble FSU's Chief Osceola mascot--which is also stereotypical.

Needless to say, the Seminoles didn't need to do rain dances in Florida. That's another common stereotype.

This is an excellent example of how mascots create a hostile and abusive environment. Even if FSU respects the hell out of Indians--which is questionable--the mascot sends a negative message to everyone else. Namely, that Indians are primitive people of the past, not full-fledged, modern-day citizens.

Worse than that, it says Indians are some sort of cartoon people living in a netherworld between reality and fantasy. This makes them comparable to our cartoon images of pirates and cavemen. Intellectually, we know these images are based vaguely on some sort of reality. But emotionally, we accept and believe that the cartoon is the reality.

In short, nothing about a mascot conveys the message that a school (allegedly) respects Indians. The mascot itself is the message: Again, that Indians are past...primitive...cartoons to make fun of.

For more on the subject, see Why FSU's Seminoles Aren't Okay. 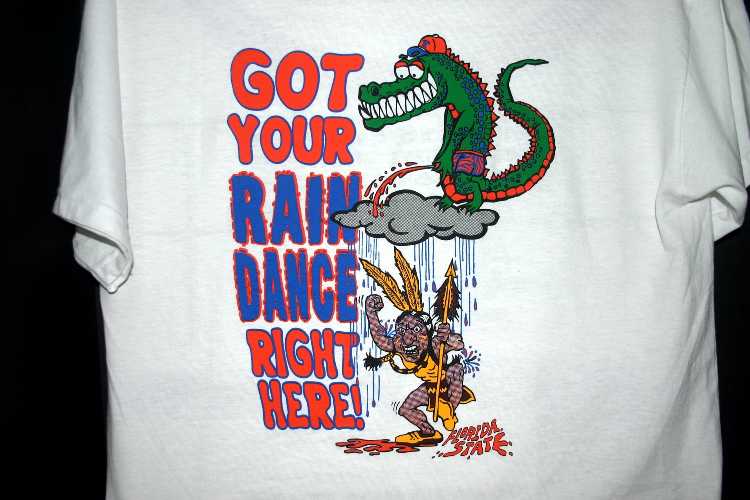