Blogger Stephen Bridenstine reviews the Penobscot Building in Detroit. The builders grew up in the Maine woods and named it after the tribe that lived there. But the building's Indian imagery mostly evokes the Plains or Great Lakes region.

Stephen includes a lot of images in his posting. Here's a typical one: 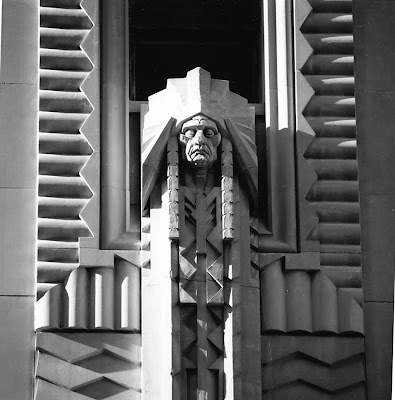 He nicely deconstructs what this building tells us:Comment:  It's almost comical how Americans love their pan-Indian images centered around the Great Plains. The Penobscot is yet another example of how deeply rooted our stereotypical beliefs are.

For more on Native-themed architecture, see The Maya Revival Style.

I had known about this, but had forgotten. I went there once.

Now, should the imagery be removed, or...?

I think the imagery is too well-integrated into the building to remove it. But the owners could post plaques explaining where the stereotypical images came from. Something along the lines of:

"Although the building was named for a Maine tribe, the Indians in the artwork come from the Midwest. The artists were heavily influenced by popular images in Western paintings, Wild West shows, and early movies. Critics now say the Penobscot's artwork presents an unrealistic, romanticized vision of Native Americans."

The building could even host a display of genuine Penobscot art and culture. With texts noting the differences between the Penobscot Indian style and the Penobscot building style. These steps would go a long way toward ameliorating the problem.