Blogger Stephen Bridenstine describes what he saw during the World Cup:

A Tale of Pemmican, an Indian, and the World CupHe looked into it and discovered it was an ad for this: 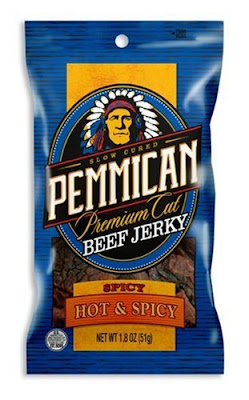 This is a product you can see at many supermarket checkout stands. It's the type of thing I don't bother to criticize because it's so commonplace. But Stephen describes what's wrong with with the packaging:Comment:  This "close to nature" rationale is the reason many companies feature a Plains chief on their products. It's the same thinking Stephen noted in survival schools with Native themes.

A related rationale is the "wild and free" one. When the product is something "strong" and "manly" like a car, motorcycle, or alcoholic beverage, this is probably what the marketers are thinking.

Again, few companies would use other 19th-century ethnic stereotypes--African spearchucker, greedy Jew, Chinese coolie--on their products. But no one thinks twice about using an equally stereotypical Indian image.

The ubiquity of these images is exactly why many so people think Indians are primitive savages or dead and gone. It's difficult to think anything else when countless images reinforce the message.

For a related packaging problem, see Nestlés Redskins Candy. For more on what's wrong with Plains chiefs, see The "Honor" of a Plains Chief. For more problems at the World Cup, see Indian Headdresses at the World Cup.
Posted by Rob at 11:45 AM

In case anyone's interested I got a response from the company posted in the comments section on my blog:

For more on subject, see: