Miami fan in headdress thrown out

Fan in Ohio says headdress led to ouster from gameComment:  For the umpteenth time, Kopen, your intent doesn't matter. You may not know that stereotyping Indians is a political, cultural, and racial issue. But it is whether you're ignorant of the fact or not.

Not that we should believe Kopen's protestations. He had to be aware of the name change from Redskins to RedHawks. And he was asked three times to remove the headdress and apparently refused. He's being disingenuous at best if he claims he wasn't making some sort of statement.

No, Kopen isn't some naive student who accidentally violated the rules. He's an arrogant bastard who asserted his white privilege to mock and caricature Indians. "My ancestors conquered and killed the Indians," he seems to be saying, "so no 'politically correct' redskins can tell me what to do. As a member of the superior white race, I'll do whatever I like."

This is a good example of what should be happening across the country. Miami is a private university, so it's not a free speech issue. Kopen received ample warning to change his offensive behavior. He refused to stop playacting in redface, the moral equivalent of blackface. He got the boot for his blatant, racist stereotyping.

Everyone who sees a stereotypical headdress at a public event should be doing something similar. Challenge the offensive Indian wannabe. Break through the sniveling "I didn't intend to offend" defense. Make the connection to the odious practice of blackface. If you can't banish the person yourself, contact an authority who can.

For more on the subject, see Kathy Griffin in a Headdress and Student "Tribe" Shows Team Spirit. 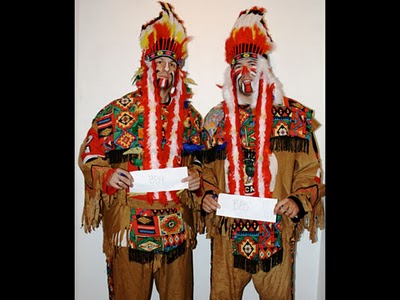