New Age guru James Ray was in the news from October 2009 to February 2010 for the deaths he caused in a Sedona sweat lodge. Now his manslaughter trial for those deaths has begun.

The trial doesn't exactly qualify as Native news, but Indians are still upset over Ray's appropriation of their culture. Some tidbits from a major article summarizing the situation:

By Jessica RavitzAnd:I knew the Lakota lawsuit wouldn't go anywhere. And for facilitating Ray's nonsense, the Hamiltons deserve what they got.

More thoughtsJournalist Valerie Taliman offered her thoughts:Surprisingly, a Native built Ray's sweat lodge:Comment:  Singing Bear could've said no to completing the sweat lodge if he thought it was dangerous. But I guess it's hard to turn down a job over a hypothetical outcome.

Incidentally, Autumn Two Bulls is one of the Indians Dominique Vantell Lonehunt attacked. I'd say she's doing a lot more to help Indians than he is.

For more on the subject, see New Book on Sweat Lodge Killer and Sweat Lodge Deaths on Dateline. 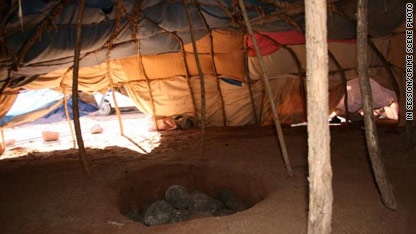 I don't know if I'd call it a fad to be Indian today; this sort of pretending has been going on for over 30 years, the exact opposite of a fad. But it is trendy...unless you're a real Indian. Oddly, this seems to be exclusive to Indians. There are no wannabe Tibetans or Hmong in China. No wannabe Maori in New Zealand.

Love that name H.E.L.P. I love when acronyms are recursive. Reminds me of EINE (EINE Is Not Emacs) and its sequel, ZWEI (ZWEI Was EINE Initially). (No, they don't have one for DREI.)

it's true that there are no wannabe Maori in New Zealand and while there isn't anybody ripping off Maori ceremonies there was a problem a few years back with drug companies wanting to patent Maori medicinal plants. I can't remember the specifics but I don't think the companies were successful due to intellectual property rights. I would have thought the Court could have ruled in the favour of Lakohta due to Intellectual Property rights.

"Singing Bear", you gotta be kidding!

You can't call yourself a wisdom keeper, ceremonial leader and healer after spending 20 years around natives learning from "elders", thats what you call a "hobbyists" or as politicians like to call them, anthropologist.

If Singing Bear is a legitimate Indian, where does his "healing" and "wisdom keeping" fit into this tragedy?

Look at this sweat lodge! It looks like it was made from a parachute. Sweats should not be treated like some quick fix, manufactured, production line healing either.

I am offended and angry at how our native ceremonies are equated with the "pardoning of sins" Christianity so proudly boasts of with it mega-malls and trinkets, just pay the admission booth and take a ride on the Jesus ferris wheel.

Its a good idea I never meet these people cause in my tradition, they'de get horsewhipped to death, but in the whiteman's laws, the criminals are protected and the innocent are persecuted.

"Singing Bear"? <_< I have never seen a bear sing outside of cartoons, and even in cartoons, it looks stupid now.

"Yeah, Mike Tyson got part of a moko. Also, on Star Trek: Voyager, Chakotay's tattoo looked vaguely Polynesian"
haven't seen Mike's moko but somebody did point out to me that Chakotay looked slightly Polyneasian - don't know if it was the tattoo that made them think that. There was a French designer also used moko in one of her collections and responded with the arrogant 'we are honouring Maori' to critism. People who cherry pick from other culures for commercial gain or status are everywhere unfortunately.