The reviews of BATMAN INC. #7 have been glowing. The only obvious problem is the cover. Stereotypical much? How many Natives have you seen riding a buffalo?

Someone on Facebook questioned this position:We're talking only about the cover at the moment. Not the interior story.

A "chief" riding a buffalo is close enough to a brainless savage. How else to tell the story on the cover? Put them all on horses or motorcycles. Show the Batmobile racing against a pickup truck. Or do something other than the "riding" motif. But don't make the Indian look like a primitive beast-master.The headdress is a legacy from the character's origin in the 1950s. But yes, they could've changed it.

Note also the barren desert background with the fantastic rock formations. This is typical of the land in northern Arizona and southern Utah. In contrast, the South Dakota landscape consists of rolling, grassy plains. 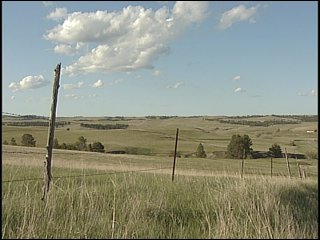 The message is clear. Indians live in remote, barren places because they live remote, barren lives. They're "out there" somewhere, choosing to live in isolation. They're not part of the American mainstream.

That's what most people believe, anyway--even though 70% of Indians live in urban places. Our mythology tells us that Indians are wild in every way: wearing wild costumes, communing with wild creatures, and living in wild places. They're wild, primitive, and savage.

For more on Grant Morrison's comics, see Indian in RETURN OF BRUCE WAYNE #4 and Chief Man-of-the-Bats.
Posted by Rob at 10:38 AM

Ridiculous. I think it's like the Small World ride: Has anyone ever seen Nelson Mandela dance with a hippo?

Oh, did you see America's Got Talent this week? They had a stripper and her "tribute to Native Americans". Not since Custer's Revenge have I been so offended.

Actually, South Dakota is so rugged in areas that it can fit the image

No, I don't watch America's Got Talent. But I think somebody sent me the video.

Those rock formations are covered with trees, DMarks. You probably could find more rugged formations--but would they be near a Sioux reservation?

The point is that this scenery doesn't represent South Dakota's reservations in particular or Indian country in general. Yet people think it does.