Anthro in RETURN OF BRUCE WAYNE #1

A forum discussion raises a good point about Bruce Wayne's recent time-travel trip to prehistoric America:Response #1:Response #2:Comment:  This also applies to the Master of the World, an Alpha Flight villain. He began as a "caveman" in northern Canada (or Asia, according to one source), but is depicted as a white man.

Indeed, this is true of all fictional "cavemen"--i.e., all Early Modern Humans who lived from 35,000 to 10,000 years ago. It doesn't matter if they lived in Africa, Asia, or the Americas--which would've made them black, Asian, or Indian, respectively. Creators invariably depict them as white.

And this is merely a subset of a greater problem. Most humanoid aliens (Star Trek, Star Wars, the Legion of Super-Heroes) are white. If they have blue or green skin, they still have Caucasian features. Most lost civilizations (the Inhumans, Wonder Woman's Themiscyra, Aquaman's Atlantis) are white too. Even fictional creatures like fairies, trolls, and mermaids are white.

Can you imagine a race of aliens who look Chinese? Or a lost civilization of the Inuit? Or a black mermaid? You probably can now that I've mentioned them, but did you ever think of them before? Or were the fictional beings you envisioned inevitably white?

Apparently writers can't imagine that the Americas were inhabited for 10,000-plus years by dark-skinned Paleo-Indians. It doesn't fit their mental map of human history. To them, the continent was more or less empty until the Europeans arrived. Indians appeared out of thin air to oppose the colonizers the way supervillains pop up to fight superheroes.

This is an example of several things: How people unconsciously express their white privilege (white skin as the default for every unknown race). How people are in denial about the racial reality. How people view Indians as inconsequential or invisible--good only as enemies in 19th-century Westerns.

Below:  A real (reconstruction of a) Paleo-Indian...

...and Anthro, the white boy who should be a Paleo-Indian. 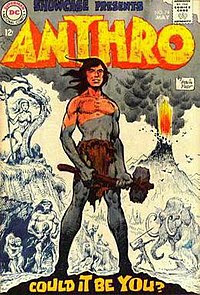 agreed re the alien thing, though there is one exception - sometimes English speaking aliens in movies get other accents, especially if they are villians or comic relief. Everybody (well many) remember the stereotyped Jar Jar Blinks but I remember being surprised at how few people noted the Asian accents given to the greedy Trade Federation in the same movie.

Also Watto was an alter kocker, wearing a funny hat, with facial hair and a big nose, and he tries to cheat people. Nope, nothing antisemitic about that at all.

I think the choice of white cavemen is a form of mukokuseki, except it's not really "stateless" because the characters clearly have racial features.

lol, love a comment that starts with "you people"
If you can't see racial stereotypes when they are glaringly obvious it says more about you than 'us'

I meant "you people" in the simplest, plainest, having nothing to do with race or stereotypes possible. "You" = "The following is addressed to the hearer or reader" (it's called "2nd person," look it up); "people" = "those who write for this blog or agree with what's written in it." But you had to interpret it as a racial stereotype. Thanks for proving my point.

Racial stereotyping will end as soon as Marxist race-hustlers like you (the blog writers and readers like Jaine) no longer influence what people think. First step to racial healing: Treat any person as if you could only speak to him/her through a curtain, like Archie Bunker did to a black man in the hospital bed next to him (the point here is, the pathological racist Archie didn't treat him his usual mean way until the curtain was lifted). Accord no special treatment, either negative or positive, to any person on account of skin color.

You believe in treating everybody the same, regardless of skin colour yet defend racial stereotyping by putting down those who challenge them. Nice