The third episode of Sleepy Hollow, titled For the Triumph of Evil (airdate: 9/30/13), had a Native theme. Here's a recap with my comments:

‘Sleepy Hollow’ season 1, episode 3 recap: ‘For the Triumph of Evil’

The episode begins with a dream demon (aka the Sandman) driving people to madness and suicide. In their basement office, Ichabod Crane and Abbie Mills research dream mythology.

On the bad side, Abbie's symbol is an hour-glass shape bisected by an arrow. It looks like some medieval rune; it doesn't look remotely Native

On the good side, Ichabod names the demon Ro'kenhrontyes. At least that sounds like a Mohawk word. Alas, the legend is apparently made up:

Was Ro’kenhrontyes a real part of Mohawk folklore?The Mohawk camp

Back to Meares's review:Good: In a brief flashback, the Mohawks and their camp look reasonable. There are no tipis or chiefs in feather bonnets--nothing too stereotypical.

Bad: The Mohawks look underdressed for a cool New England night. I'm guessing they wore shirts most of the time.Ichabod claims more than that. He claims their "nation" (singular) stretched across the continent. Not quite, since there wasn't one Indian nation.

He claims the Indians' system of governance formed the basis of the laws of the 13 colonies. One, I'm not sure how he could say that before the writing of the Constitution. Two, this is an unproven theory that he almost certainly wouldn't have been familiar with.

He also says the Mohawks fought with him against the British. Maybe a few did, but most of the Iroquois tribes sided with the British against the Americans. The Oneida were the only tribe who fought on the American side. But I guess "Mohawk" is more familiar than "Oneida" so they went with that.

So Ichabod reaction is superficially good, though it hews to a liberal line unheard of for an 18th-century man. But it's laced with problems.

He's dressed in a suit and bolo tie and talks like a regular guy with a snarky attitude. In other words, he doesn't look or act like a stereotypical Indian.

Bad: He's played by Michael Teh, an actor from Australia. He look and his name suggest he's Asian--perhaps Chinese. That they couldn't find a Native actor to play the role is lame.

Ambivalent: The Geronimotors car lot with its chopping tomahawk sign.

I think Duncan the Mohawk owner and the show's creators are trying to have it both ways. One the one hand, Duncan and they are mocking the average American' ignorance. They presumably know better, and Duncan seems like the kind of shrewd businessman who would exploit his Native heritage.

On the other hand, the difference between using stereotypes to mock ignorance and using them, period, is subtle. I inferred the creators' intent, but not that many Americans will make the effort. They may well believe that Mohawks, shamans, Geronimo, and tomahawks are part of one big Native culture.

What if a white man owned this used-car dealership? Then the sign clearly would be offensive because of the stereotypes. Having a Native owner may change a few viewers' perceptions, but it doesn't change the equation significantly. Most people will read the stereotypes superficially, so the show probably should've omitted them.

The lot also has one or two wooden Indian as decorations. This is taking the gag a little far, I'd say. Even if Duncan thinks he's mocking his customers, at some point he's contributing to the stereotypes just like an ignorant non-Native.

Duncan the shamanDuncan tries to disabuse them of any stereotypes they may have. He doesn't live in a teepee or dance in powwow. Ichabod says that's too bad, because he rather liked powwows.

Uh, what we now call powwows didn't occur till a century after Ichabod's time. From Powwows.com:Sure, there might have been other tribal gatherings, but they probably weren't for festive dancing, and they probably weren't called "powwows." Duncan is referring to the modern powwow concept concept and Ichabod is referring to something else. But the episode again suggests that there's one Indian nation that has celebrated the same way for centuries.

Bad: Most Native cultures, including the Mohawk, don't have shamans. A shaman is a particular kind of spiritual practitioner, not any indigenous person who does magic.

Bad: The lodge is dim and smoky and hung with furs, blankets, and oil lamps. It conveys the idea that the "shaman" is engaged in something dark and unnatural, like black magic.

Scorpion magicBad: It wasn't enough to send them into the dream state with drugged tea? It required a scorpion's sting to give them "control"? That seems unnecessarily dark. It implies that Native religion is unhealthy if not dangerous--not "safe and sane" like Western religions. 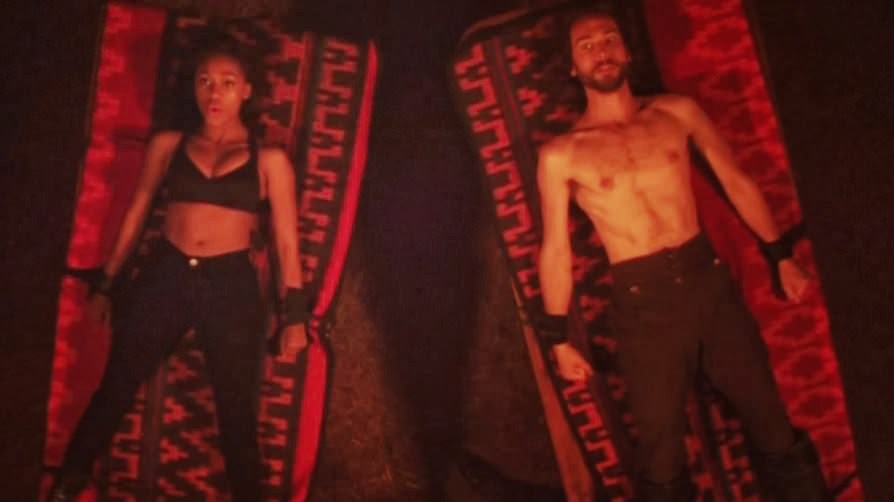 Even if the show is supposed to be scary, the creators could've done something else. Like give them "magic mushrooms" and send them on a "bad acid trip." There's no reason a trip to the dream world should require deadly venom. The tea alone could've sent them and given them control.

Rebecca Pahle of TheMarySue.com sums up the episode's Native bits:My thought: If you're gonna have a Mohawk demon, it makes sense to have a Mohawk involved in its defeat. But that means having a medicine man or the equivalent doing supernatural stuff, which is generally stereotypical.

I'm not sure there's a good solution to this problem. You could have several Mohawks, some of whom don't believe in the demon. You could make the demon non-Native and use the Mohawks in another story.

Overall, I'd say the Native bits are another mixed bag, like those of the recent Modern Family and The Crazy Ones. Bringing Indians into Sleepy Hollow's world, and having a young Native business owner with a modern attitude, are great. But the ignorance about Mohawk lore, the Geronimotors car lot, the non-Native actor, and the whole supernatural scene cancel that out. One step forward, two steps back.

P.S. In the next episode, Sleepy Hollow briefly dramatized the Boston Tea Party. Kudos to it for not showing stereotypical Indian "braves," even though some were present. They weren't necessary for the story, so it was smart to avoid potential problems and leave them out.