Indians in The Goode Family

This weekend I watched the pilot episode of The Goode Family. It's the latest animated comedy from Mike Judge, creator of King of the Hill. Some reviews:

A Clan So Virtuous Even Its Dog Is VeganTV Review:  'The Goode Family''The Goode Family' review--Sepinwall on TVComment:  Because it's all about political correctness and the environment, The Goode Family includes a few references to Indians. One is this exchange:This bit shows Mike Judge's continuing interest in Native people. It also shows the condescending nature of the series. Helen calls "rainforest people" (aka Amazonian Indians) "backward" because she doesn't sincerely believe in multiculturalism.

In addition, a college scene shows a group of indigenous Peruvian musicians in the background. And the Goodes have a Navajo-style rug hanging on the wall.

The Goode Family misfires for a couple reasons:

1) It bashes liberals almost nonstop. The lines are often funny but there are too many of them. The equivalent on King of the Hill would be if every character ranted about taxes, gun control, and immigration all the time.

Dale Gribble is like this, but King of the Hill clearly portrays him as a wacko. To be like this all the time is unrealistic and unbelievable. People don't assert their values in every sentence they utter.

2) The Goodes are eco-freaks only because it's trendy, not because their beliefs stem from long-held convictions. The Goodes don't know whether to call blacks "blacks," "African Americans," or "people of color." At a supermarket, Helen is overwhelmed by which kind of organic apples to buy and whether to use paper or plastic bags.

If she were a genuine liberal rather than an object of ridicule, she would've developed answers to these questions long ago. She'd be like Hank Hill, who swears by perfectly mowed lawns, power tools, and propane. She wouldn't panic when someone questions her values because those values would be who she was, not some tacked-on pretensions.

I'll try the show again to see if it gets any better, but I'm not hopeful. For more on the subject, see TV Shows Featuring Indians. 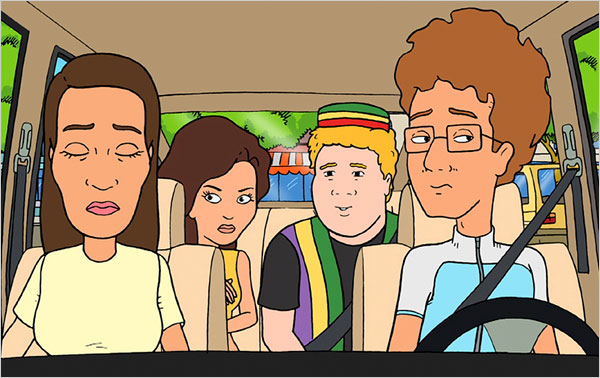 You clearly have never met a lot of eco-freaks. Most of them are somewhat trendy. Trendiness is why you meet vegans who endorse margarine, both the trans fat kind and the rainforest-destroying palm oil kind (which for all its talk about being cholesterol-free, is 47% palmitic acid). And of course we could always talk about Sea Shepherd (and never have initials been more apropos).

Then of course you get into the eco-freaks who find ecological reasons for their not shaving, nudism, and marijuana use. And of course their preference for juicing and soy smoothies.

But of course, in the 21st century, it's hard to deny global warming.

Oh man it's hilarious that Rob gets all uptight when his pathetic little POV's mocked.

I haven't met a lot of eco-freaks, Anonymous, but I've met enough people who are vegetarians, shop in organic stores, bring their own bags, recycle, etc. These people aren't being "trendy" and they don't panic when something calls their values into question.

Given how many hundreds of things I've criticized from all over the political spectrum, your comment is even stupider than usual, Stephen. If that's possible.

"Given how many hundreds of things I've criticized from all over the political spectrum, your comment is even stupider than usual, Stephen. If that's possible."

I just thought it was funny how defensive you seemed about your liberalism in this post. ;) Also I await a reply on the white 'privilege' post.

Actually you've been silent about bigotry or idiocy from leftists for example you haven't critiqued this (leftist) racist cartoon:

And you haven't criticized Michael Moore's support for terrorists or any of the other nonsense from the left that demonstrates that leftwing idealogy is just as bad as right wing idealogy (dualism is for losers). So nice double standard you have there. ;)


I don't mean this in a bad way, of course! Societal concerns aside... I just hope that as the price of memory drops, the possibility of uploading our memories onto a digital medium becomes a true reality. It's a fantasy that I daydream about almost every day.

The cartoon and Michael Moore don't have anything to do with Indians, Stephen. In general, I comment only on the intersection of Native America and pop culture. How many times do I have to tell you this before it sinks in?

As usual, your personal attack is stupid and wrong. You couldn't come up with a valid criticism of me if you tried.