Order of the Arrow's Indian play

Scouts mark end of Order of the Arrow week with Indian dramaComment:  Hmm. From glimpses of the play in the video and photographs, it looks more authentic than inauthentic. The title Ode on a Burial Mound suggests a lament for the vanishing Indian, which would be problematical. But we can't say for sure without knowing more.

In general, whites shouldn't be playing Indians. But since this is a private, amateur performance rather than a public, professional one, it doesn't take jobs from Native actors or spread misinformation widely. Therefore, it's not a big problem.

Of course, the Order of the Arrow has offended Indians in the past by using Plains stereotypes in its ceremonies and performances. I don't know whether it's still engaging in this behavior.

Below:  "Boy Scouts playing members of the Cheraw Indian Tribe stand on stage during the presentation of the Ode on a Burial Mound at Camp Coker in Cheraw, SC, on Friday, July 23, 2010. The play, presented by Order of the Arrow Santee Lodge 116, marked the end of the Order’s week at camp." 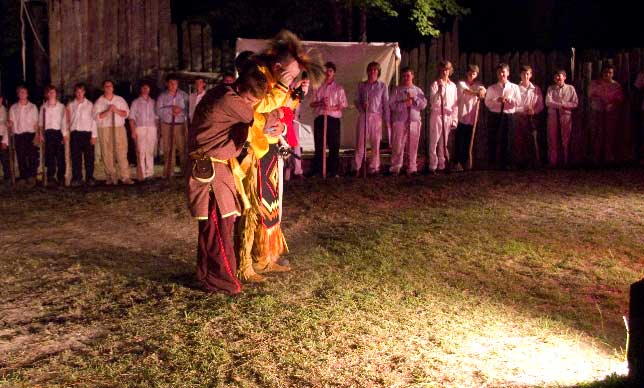 I was a participant in the play, and the people who try to put this play on make it as authentic as possible.

Last year, the play focused on the great Seminole leader Osceola, and this year it was about the Cheraw tribe.

Yes, we admit to having mostly whites on the cast, but that's unavoidable. The racial diversity of the camp is very slim, but we did have several African-Americans, along with an Italian who has served as the Native American chief in the last couple of plays (who is also majoring in theatre, so it works out)

The tradition of Santee Lodge 116 putting on a pageant is about 50 years old, and the people who put it on try to make it as real as possible. One of the kids who is active in the ceremonies and dancing parts of the OA is learning dancing skills from an actual Cherokee dancer, which is just trying to make it more authentic.

How did the Santee Lodge get its name?

Connections. No words of the Santee language have come down to us, but there is little doubt that they belonged to the Siouan linguistic family.

History. The Santee were first encountered by the Spaniards during the seventeenth century, and in the narrative of his second expedition Captain Eçija places them on Santee River.