The New York Times has posted eight op/ed pieces on the Cherokee Freedmen issue. Below are some of the best quotes as chosen by Indian Country Today:

New York Times Debates Tribal Rights v. Racial JusticeI think Maillard had the quote of the day in a passage just after the passage ICT quoted:Comment:  Why would Cherokees be saying these kinds of things if they weren't prejudiced against blacks? Sounds to me like they are prejudiced.

For more on the Freedmen, see US Threatens Cherokees Over Freedmen and Limbaugh Cheers Freedmen Expulsion.

Below:  "A Freedmen family in the Oklahoma Territory, 1900." 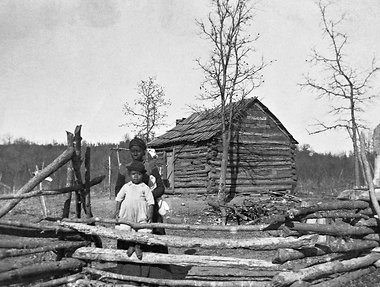 Did the Cherokee even have slavery before white contact? I don't know.

What I do know is, if we talk about sovereignty, I've heard that rule before.

Nothing ever gets solved.

I'm pretty sure Germany has settled up with the Jews.

As for the Indians, make sure all the treaties are recognized.

As for the Tibetans, they aren't even in China. If China pulls its armies back to the Chinese border, that problem is solved too. Tibet never threatened China in any way whatsoever.

Sovereignty might be a legal stance to hide behind, but everything Hitler, Andrew Jackson and Custer did was legal also.

The Oklahoma Cherokees are a whites only club thanks to the conservative movement across the country that set race relations back 40 years. It was predictable.

Like the US Governments policies towards tribes, fickled and gauged by the economic, social and political populism of the times, the Cherokees in Oklahoma always bend to the will of state government. It was the Cherokees that first agreed to pay into the corrupt and incompetent states purse because they are "good ol'boys" and need Anglo approval.

The rest of Oklahomas tribes were angered and confused. Sovereignty diminished is where tribes lose.

The Freedmens rights should never be questioned, after all, they are not asking for anything but their rightful place in history, something you would think an Indian tribe would understand.