In a recent column, Pat Buchanan summed up what the conservative teabagger/deather/birther movement is all about:Kudos to Buchanan for finally getting something right. He's nailed what conservatives--Limbaugh, Beck, Palin, et al.--are whining about in 15 pithy words.

This is essentially the point I made in Decoding the Teabagger Code. So I'm glad to see Buchanan agrees with me. And so much more succinctly, too.

The Tea Party protests aren't about taxes, healthcare, or creeping "socialism." They're about white people bemoaning their loss of power. That's why 99% of the protesters are white--why minorities don't support the white power teabagger movement.

Maybe we should call Buchanan and his whining white brigade "teababies": a combination of "teabaggers" and "crybabies." Poor teababies crying over the loss of their white privilege. "They" (blacks, women, immigrants, gays, foreigners, et al.) are taking over and the teababies don't like it!

In case you weren't sure...

It's fun to lampoon the teababies, but we shouldn't ignore Buchanan's argument. In case someone thinks he has a point, Judy Gans posted this response on Facebook:Yes, Buchanan's argument is asinine, all right. America was a white-ruled country because Anglo Americans killed, conquered, enslaved, and oppressed people of other races, religions, and cultures. And Buchanan would like to return us to the days when white men like George Washington and Ronald Reagan ruled.

This is a continuation of Buchanan's argument in Buchanan:  US "Built by White Folks", which got trashed in Buchanan's Intellectual Dishonesty. So we don't need to discuss it further. Suffice it to say that Buchanan loses again.

For more on what today's conservative teababies think, see The Evidence for Teabagger Racism and the related links.

Below:  "I even look a little like George Washington and Ronald Reagan, don't you think? People who resemble me should be in charge." 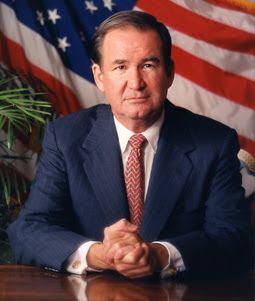 "The Tea Party protests aren't about taxes, healthcare, or creeping "socialism." They're about white people bemoaning their loss of power."

I was at one of these, actually. Taxes and "creeping socialism" were huge issues, healthcare and white people bemoaning loss of power weren't part of it it all.

Judy Gans said: "where is their indignation over their white male (generally) CEO population being "rewarded" with corporate welfare for decades"

Well, corporate welfare in the form of the Bush/Obama bailouts was actually a very big issue (several signs) at the tea party I went to observe.

Bush increased the size of the federal government significantly. As you say, he initiated the bailouts. But there wasn't a single march to protest creeping socialism during his administration. If economics is the teabaggers' primary concern, why not?

Nor did they march when Bill Clinton passed his "big government" programs. So spare me the inevitable rejoinder that the teabaggers would've reacted the same way to John Kerry or Hillary Clinton. They didn't react the same way to the last liberal president.

You haven't addressed why the vast majority of teabaggers are white. Why doesn't the movement reflect the US population, which is 30% nonwhite? Do you think white people are smarter and understand government better than minorities?

In Decoding the Teabagger Code, I explained how claims such as "socialism" are codewords for what people really mean. That Americans won't talk openly about their racial doubts and fears is well known to social scientists. If you don't understand this, I suggest you read up on the subject. It's more complex than "no race talk = no racism."

Buchanan says the protests are happening because whites are afraid. Do you think you know the situation better than he does? I don't. I think he knows it better than you do. He's an expert on what white people fear.

"So spare me the inevitable rejoinder that the teabaggers would've reacted the same way to John Kerry or Hillary Clinton."

There's simply no reason to believe that they would not do so. It's not a matter of "there being something so different about Obama" but rather a matter of "why didn't we think of this before?" The only difference is that the few nuts with racist Obama signs would not be present, or would have different signs.

"But there wasn't a single march to protest creeping socialism during his administration. If economics is the teabaggers' primary concern, why not?"

In your attempt to imagine racism where it does not exist, you are missing one obvious and huge factor: partisanship. It's like with the liberal protester types who were active for 8 years and are pretty much staying home even when Obama has troops in the Middle East. Both groups, much more than they claim, abandon principle to party too often.

"You haven't addressed why the vast majority of teabaggers are white. Why doesn't the movement reflect the US population, which is 30% nonwhite?"

Well, consider the percentage you quote. 30% nonwhite means 70% white, which is a vast majority. A perfectly proportional teabagger movement would still be a vast majority white.

And the one tax protest I observed closely (over 90% white) was pretty close to the actual demographic proportions for the area.

"I explained how claims such as "socialism" are codewords for what people really mean."

The problem with codewords like that is that too often they become exercises in pure imagination. The code translation becomes a leap of logic that takes the definer anywhere they want to go.

"Buchanan says the protests are happening because whites are afraid"

He's strongly racist, and is not really involved in the tax protests, so he is looking at it from the outside. Like with so many other things (and you have blogged about them before), Buchanan is missing the mark. Buchanan is trying to summarize how whites think, and you agree. Do you agree with him when he summarizes how minorities think?

What a silly comment. He initiated the bailouts in the last months of his term, when he was already a lame duck.

And as for him increasing the size of the federal government? His spending, while bad, will be a pittance compared to what Obama will do. In the first month of his term, he signed a massive bill increasing the deficit by hundreds of billions (and no, not all "responsible economists" thought it was necessary), and we can expect more to come.

Anon: The "lame duck" situation does not change the fact that Bush willingly signed the no-strings-attached bailouts into law.

Obama's much worse overspending does not excuse Bush for it.