Disney to use Sacagawea dollars 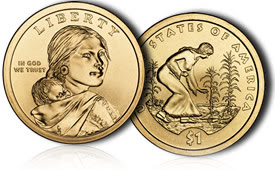 " By introducing more of the public to the coins, it is felt they will become more accepted and a phase-out of the dollar bill could eventually occur."

More evidence that the Mint has no idea what they are doing in terms of trying to get them accepted.

I remembered when they first came out. They were promoted heavily, to create an interest. And then I went to the bank to ask for some, and I got snapped at by the teller because none existed and they were tired of the question. Turns out that the government promoted them, but couldn't be bothered to mint them.

So, now the geniuses at the Mint have decided that the way to introduce "more of the public to the coins" is to make them available at an amusement park that has a $68 admission price.

Seconded. I was even under the impression that the Sacagawea coins had been discontinued.

You want to get them used, supply them to banks, as dmarks says. Grocery stores and vending machine operators should also be encouraged to make them available.

Anon: Apparently, the Mint's strategy was to promote the hell out of them before they existed. Now that they are around, it is like it is a secret that they even exist.

Not only is the Mint still making Sacagawea dollars, it's varying the reverse side to make them more interesting and collectible. See Dollar Will Commemorate Indians and the links above for details.

The Mint should be glad that Newspaper Rock is getting the news out. The only thing I have seen in the media for years concerning these coins has been here. (Other than one report I did see elsewhere recently, but even then it was about something I had read before at Newspaper Rock).