By Derek Boyd HankersonI've never heard of a Confederate flag representing the Haudenosaunee (Iroquois) tribes in upstate New York. Nor could I find anything in a brief Google search. It sounds as though Hankerson is saying the Confederate flag represented the New York tribes as well as the Southern states because both were named the "Confederacy." If so, that would be a ridiculous claim.

But yes...believe it or not, Hankerson implies the first confederacy led to the second:Okay, thanks for clearing up the linkage between the two confederacies.

Wow. How pathetically bad can you get? This is the weakest argument I've heard in a long time.

Below:  The Confederate, Nazi, and Iroquois flags. Three symbols of pride and heritage. Three peas in a pod. 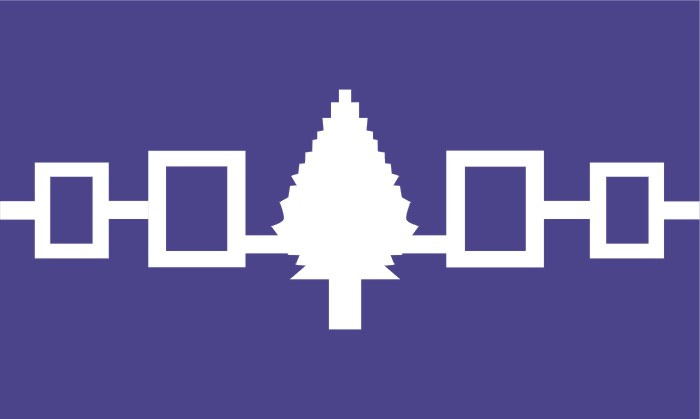 A bunch of Bubbas have turned a symbol what just used to mean, "Hey some of my ancestors fought in the Confederate army," and remember, it is very few who fought to keep slavery alive; most fought for other, more personal reasons. Most people could not afford slaves.

So the Bubbas had to have a flag that means, "Hey, I'm ignorant, loud and probably drunk." Too bad they couldn't design their own.

I don't think Southern whites had to own slaves to feel a sense of entitlement, Linde. They realized that ending slavery would reduce their power and privilege whether they owned slaves or not.

I agree with you about a new flag. If Southerners really cared about their states' pride and nothing else, why wouldn't they design a flag that included rather than excluded minorities? That no one has seriously proposed this tells us all we need to know about them. They want to honor the white-ruled Confederacy, not the modern multicultural South.