Some postings answer the questions I get asked sometimes:

Why am I disseminating news and writing analyses rather than fighting for social justice in person? (Rob Should Fight Poverty?!)Am I "speaking for Natives" and preventing them from speaking for themselves? (Whites Fighting Racism Is Racist?!, Rob Unqualified to Discuss Stereotypes?!, etc.)What's the point of education when so many problems need hands-on help? (Educational Value of Blogging)

Australian philosopher Simon Longstaff says we need to question everything to heal our sick institutions.

By Gregory RodriguezComment:  This is a good statement of my position. You can't begin to reform anything--politics, economics, culture--if you don't believe anything's wrong. So my goal is to encourage people to think critically. To look at America's mainstream beliefs and ideas from another perspective--a Native or multicultural perspective. To question things we usually take for granted.

For more on the subject, see William Means on Education and Why Does Rob Keep Criticizing?

Below:  As one example, Indian mascots continue not because mascot lovers have superior arguments. They continue because most Americans haven't thought about them. Encouraging Americans to think about such issues is the first step toward addressing those issues. 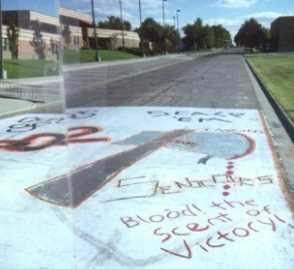 "Below: As one example, Indian mascots continue not because mascot lovers have superior arguments. They continue because most Americans haven't thought about them."

I didn't mind them.... until I thought about them.