ICT's take on The Dudesons

Four months after the fact, Indian Country Today publishes a review of the Cowboys and Findians episode of The Dudesons:

A Native perspective on ‘Cowboys and Findians’

‘The Dudesons’ controversial episode on MTV

By Vincent SchillingComment:  I see Saginaw Grant and Michelle Shining Elk are still playing the victim card. Poor Saginaw couldn't do a thing about the episode, and anyone who doesn't understand this is a big meanie. In other words, crybaby alert!

Grant claims the episode was worse before he offered his advice. That suggests one solution: Don't take the job if it's one of the most racist depictions of Indians ever, genius. Your paltry salary isn't worth the harm you'll cause your own people.

Not only could Grant have skipped the production, he could've quit it or halted it halfway through. He also could've protested the final show if it somehow surprised him. He didn't do any of these things. In fact, he defended it as if he was unaware of its obvious offenses.

Later in the article, Grant is quoted saying, "I did not even know about the script." But he also said, "We discussed several issues and concerns. Many situations were written out or re-worded." How do you reword or rewrite the script when you don't know anything about it? Sounds like Grant is dissembling to me.

As for Michelle Shining Elk, she still seems clueless about the difference between criticizing the Dudesons and criticizing Grant. I've done the latter as well as the former, but most activists have stuck to blaming MTV and the Finns. But Grant is now one of Shining Elk's PR clients, so that may explain why she's still shilling for him. You can't bite the hand that feeds you, right?

P.S. This article is also notable for quoting me. But you'll have to read it to see what I said.

Below:  "Follow the script that I helped rewrite but didn't know anything about." 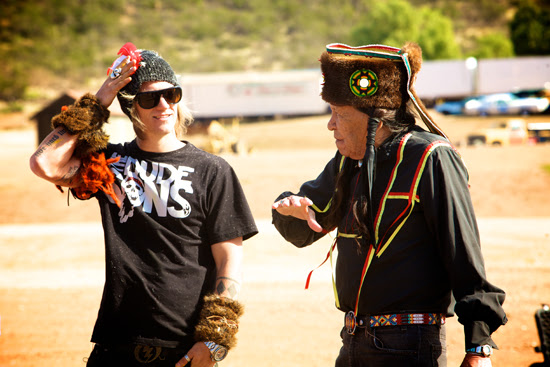 For more on the subject, see My Dudesons Interview.