Back in 2001, someone named Ruel Macaraeg created a website to "to test whether any of the supernatural powers claimed on behalf of ritual weapons can be validated under controlled scientific conditions." Macaraeg claimed that indigenous and other non-Western societies believed their weapons had magical powers. And that he could prove these people wrong.

As far as I know, his claim about what these societies believed is false. And it's impossible to prove a negative, so his plan was doomed to fail. But because he deemed non-Western societies primitive and superstitious, he earned a Stereotype of the Month nomination.

Correspondent Al Carroll, who brought Macaraeg to my attention, added this note:My response to this:On a subsequent page, I debated yaomachtia with Macaraeg, but this is the gist of the story. That was the last I heard of yaomachtia...until now.

Recently I received this e-mail from Lozano, whom I hadn't heard from before. Nine years after the fact, he wanted to set me straight:Had my research skills failed me? After nine years of indexing pages, was Google loaded with information on yaomachtia? It was time for an update on the subject.

Ask and ye shall receive

I Googled yaomachtia once again and sent Lozano this reply:Comment:  There you go. Lozano got the update he wanted. I hope it was as satisfying to him as it was to me.

Needless to say, Lozano didn't respond to this e-mail. He has yet to provide a shred of evidence about yaomachtia's existence. The yaomachtia.com website is now defunct.

If Lozano comes across this posting next, my offer still stands. Go ahead and prove yaomachtia's existence to me. Put up or shut up. Until then, I'm still comfortable labeling it a "fictitious" martial art.

For more on the Aztecs, see Were the Aztecs "Murdering Animals?"

Below:  My impression of Macaraeg's impression of Aztecs: a primitive and superstitious lot. Courtesy of the movie The Road to El Dorado. 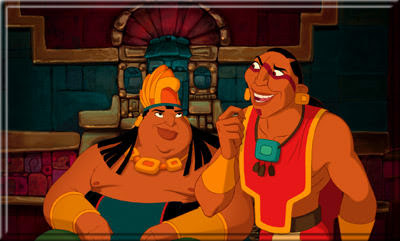