Reflections on Empire and Uppity Indians

By Tim WiseAnd:Comment:  Wise notes the basic hypocrisy of many Americans. If Ward Churchill was wrong to call the 9/11 victims "little Eichmanns" who deserved what they got, why were right-wing pundits cheered for wanting to destroy entire (Muslim) nations? Why haven't we shamed and shunned these maniacs the way we did Churchill? How is it that advocates for Nazi-style genocide--the real little Eichmanns--still walk among us untainted?

Moreover, our hypocrisy about Muslims is tied to our hypocrisy about Indians. Countless Americans think Indians deserved what they got because they were primitive savages akin to rabid dogs. We had to clear the native flora and fauna (including Indians) out of the way before we could settle and civilize the land.

We hear this constantly. If you claim Americans killed Indians, you can practically guarantee how many Americans will respond. "The Indians killed each other before the Europeans arrived. They scalped, tortured, and mutilated people. We had to treat them like the animals they were."

Which is basically what we've said about Muslims the last few years. "They're savage, barbaric, evil. They have no sense of decency or humanity. They want only to conquer, kill, and destroy us."

For more on Ward Churchill, see ACLU Backs Ward Churchill and Churchill's Role in Native Studies. For more on the similarities between Indians and Muslims, see Muslim "Tribes" = Indian Tribes?! and Yesterday's Cherokees = Today's Muslims. For some typical defenses of America's genocide against Indians, see: 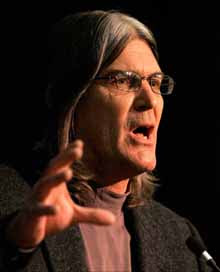