Adrienne Keene writes about a little-known "Indian" term in her Native Appropriations blog:

"Indian Run":  Offensive?Comment:  I did a brief search for the term's origin. I didn't see anything on the subject except "no known origin."

I vaguely recall hearing this term before. I think it comes from seeing Indians run in single file. The bit about going to the head of the line probably was a non-Indian addition.

I did see several locations using the phrase:

So I presume it was fairly commonplace in the olden days. People probably could've defined it then without relying on the Internet.

Adrienne asks if it's offensive. Well, I'd say it's stereotypical, since most Indians probably didn't run this way. I'd put it on the "too many chiefs" level, since it's not trying to denigrate Indians. More of a minor offense than a major one.

For a similar type of stereotype, see "Too Many Chiefs and Not Enough Indians." 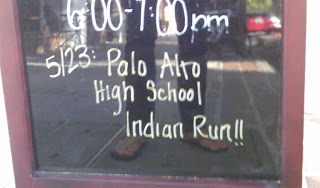