I've discussed Karl May's Winnetou before. For those who don't know the story, here it is:

WinnetouThe Germans made a series of Winnetou movies in the 1960s. Recently, a couple of production companies have proposed doing a new Winnetou film. This time, one hopes they'd try harder to make the movies authentic. For instance, to use Native actors rather than white Europeans in wigs.

Last week, the second of these groups posted their plans on the NativeCelebs page in Facebook. They noted the changes in the industry's portrayal of Indians:A couple of bright red flags here. One, talking as if Indians were all members of a single race and culture. Two, talking as if they all respected nature and practiced sustainability equally. Three, projecting these values onto the Apache, one of the more warlike Native cultures.

Needless to say, none of this talk of nature or sustainability was in the 1890 novels. Not in the first one I read, anyway. Unless it's injected into the movie with subtlety and care, it'll stand out like a sore thumb.

The group also talked a bit about how they plan to evolve Old Shatterhand's character. ShatterhandAs far as I recall, no one had any "spiritual values" in the first book. So they're talking about imposing a modern, almost New Age sensibility on a series of old-fashioned potboilers full of mistakes and stereotypes.

Can they do it, especially when they think all Indians belong to one touchy-feely culture? I have my doubts, but we'll see.

For more on the subject, see The German Obsession with Winnetou. 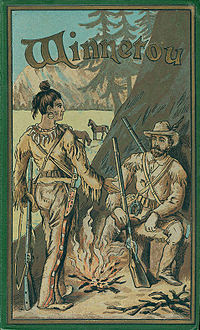