An article in Psychology Today has received a lot of scorn this week. It purports to prove that black women are "objectively" the ugliest (least attractive). I mention it because Native women came in as the second ugliest.

Here's the article and its key finding:

Why Are Black Women Less Physically Attractive Than Other Women?  Why black women, but not black men?

Published on May 15, 2011 by Satoshi Kanazawa in The Scientific Fundamentalist 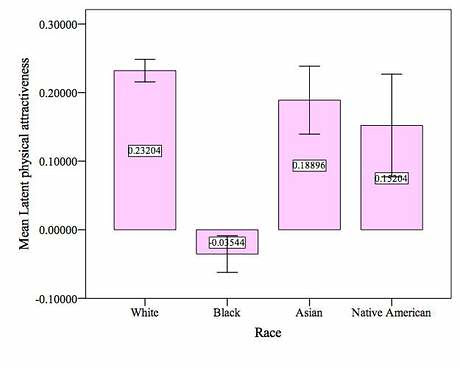 A critique that puts this study in context:

Racist Psychology Today article claims black women are objectively less attractive than other womenAnd more criticism, including a comment about the study's role in racial politics:

Voices:  The Satoshi Kanazawa StudyComment:  I'm not sure how Kanazawa made his calculations. It sounds like he took them from mostly white Americans who grew up in a culture where fair-skinned blonds are the standard of beauty. You know, the people featured in most movies, TV shows, and magazines. I can't imagine how that's not a completely biased pool of subjects.

Note that the results are about what we'd guess with zero data. Asian women, considered the most "exotic" minority, are ranked close to whites in beauty. Native women--at least, alluring Indian "princesses" like Audrey Hepburn, Cher, and Disney's Pocahontas--are third. And black women--widely criticized in our society as fat, loud, and sassy--are a distant fourth.

This is basically a ranking of America's racial prejudices, not of women's "objective" beauty or anything else. It's ridiculous.

Below:  An Indian princess working hard to surpass those sexy Japanese geishas and China dolls.

I'm horribly offended that Ann Coulter gets to be classified as a woman. ;-)

What a bunch of horsepuckey!

This is as bad as phrenology! But what do you expect; a lot of psychology always has been pseudo-science.

This study is bullshit. The Indian Princess stereotype/fantasy would not exist if Indian women weren't hot hot hot.

Apparently when we aren't prancing around in loincloths and headbands we aren't attractive.

L.E., please keep Ann Coulter in your gender. Mine doesn't want her!

"Evolutionary psychology" is just a politically correct term for sociobiology, and the first sociobiologists, you may remember, were trying to argue that there was an evolutionary advantage to being a serial killer.

There is, of course, the flip side of this. What about male attractiveness? Certainly in mammals, the male has more reasons to be attractive than the female.

Another thing: What is not explained is why white women go to tanning salons, risking skin cancer. And go to get collagen injections. Seriously.

Haven't we seen this study before? It was called Eugenics, and it was very popular in the US, or should I say, it still is? Here is what you'll find in Wiki;

Today it is widely regarded as a brutal movement which inflicted massive human rights violations on millions of people.

The "interventions" advocated and practiced by eugenicists involved prominently the identification and classification of individuals and their families, including the poor, mentally ill, blind, deaf, developmentally disabled, promiscuous women, homosexuals and entire racial groups -- such as the Roma and Jews -- as "degenerate" or "unfit"; the segregation or institutionalisation of such individuals and groups, their sterilization, euthanasia, and in the extreme case of Nazi Germany, their mass extermination. (WIKI)

Sound familiar? Now apply this to American history and its past, or current policies and popular culture towards native peoples here keeping the mascot issue and other racial anti-Indian views in mind!

There's a difference between a pseudo-study on female beauty and eugenics, Anonymous. Kanazawa may have racist beliefs, but that doesn't mean he wants to kill or sterilize anyone.