Note how much care and effort this sculptor put into his portrayal of King Philip:

By Laura Fedak PedulliComment:  There's no picture of this statue, but the description is good. It sounds like the opposite of the approach Cyrus Dallin took with his stereotypical sculpture of Massasoit, King Philip's father. 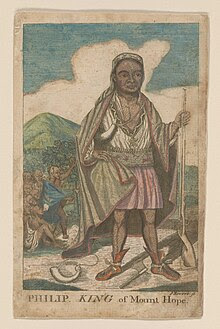