I am Apache Mangas Colaradas ... from Swansea

Charged for having badger paws and eagle wings in his home

Fights case on grounds animal relics are part of lifestyleAlready you can see the red flags waving. This "Mangas" is spouting generic New Age pap, which he believes is what all Natives believes. What he isn't saying is anything specific about being Apache.

But maybe he really understands Apache culture? Well, no.

Making tomahawks and bows and arrows, and living in a teepee, are more evidence that "Mangas's" thinking is stereotypical. So his talk of being one with the animals and nature.

His facepaint is probably phony, though I don't know enough about Apache practices to say for sure. But the fringed buckskin shirt and pants with Native designs down the front are definitely phony.

Here's some info on the real Mangas Coloradas:

Mangas ColoradasNote that the Brit has spelled the Apache's name wrong. Does he know "colorada" isn't just a random collection of letters? That it's Spanish for "red"? I doubt it.

This photo must be of Mangas Coloradas's son Mangus: 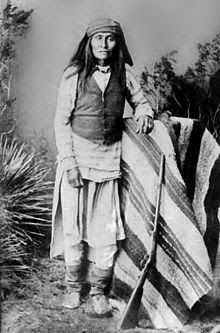 No headdress, warpaint, or fringe. No adornment of any kind, really. He isn't trying to look Indian, he is Indian.

Of course the Brit isn't satisfied with being an average Apache. He has to be a great war chief. It's clear his playacting isn't about being a humble Indian who's one with nature. The Brit is trying to appropriate and assume the Apache's mantle of greatness.

Could this clown even pass an elementary test on the Apache? For instance:

Again, I doubt it.

If that wasn't ridiculous enough, here are the clinchers: his stereotypical Plains headdress and the Lakota phrase "Hoka hey." Neither has anything to do with the Apache.

This wannabe apparently knows little or nothing about Native history. Or about Native life today. Like so many New Age types, he's emulating the Plains Indians he's seen in a million stereotypical images. He wants to be the "noble savage" that exists only in his imagination.

Hoka he is a Lakota interjection, along the lines of "Let's do this!" Oddly enough, later said by one Leeroy Jenkins in an infamous World of Warcraft video, though Custer was more Leeroy in this case.

"Today is a good day to die" basically means you'll die some day, and today's as good a day as any.