Pensioner: 'I am an Indian in a white man's body'

By Omar OakesAnd:Comment:  How many of these morons are there in Great Britain? This "Wolf" resembles the "Mangas Colaradas" whom I mentioned previously.

You gotta love how these wannabes always latch onto the Apache--perhaps the most widely known "warrior" tribe. The "Wolf" name is the same idea. These idiots want to show everyone how brave and noble they are, so they go for the most stereotypical names and images possible.

In other words, no peaceful Hopis for these sheep in wolves' clothing!

And the ceremony involving a "witch doctor"...priceless! I'm sure the Apache love people who call their priests and medicine men "witch doctors." That shows a real understanding of Native religion...not.

Did "Wolf" understand the ceremony's meaning? Did the ceremony even happen? If it did, was it conducted by a bunch of New Agers and wannabes, not real Apaches?

Several Apache tribes have cultural centers and museums. If Grinsted isn't lying outright, he's presumably talking about a particular Apache tribe. But the fact that he hasn't specified a tribe is telling.

I also love how he's bragging about his wig and facepaint. A couple of problems there. One, hair doesn't make the Indian. Today's Apaches generally don't have long hair. Two, I don't think Apaches generally wore facepaint. If they did, it was during warfare--which isn't a condition that applies to "Wolf."

The fact that he thinks he needs long black hair and facepaint to be an Indian kind of says it all. His thinking is nothing but pure, ignorant stereotyping.

This posting led to a discussion about Grinsted on Facebook:I don't think he even has to move for this to be a valid criticism. Let's say the choice is 1) dress right but don't help others or 2) help others but don't dress right. I think most Natives would say the second approach is more Native. They value how people act more than how they look.Right. He's basically a human mascot.

I've read about the German hobbyists whom this guy resembles. Some have the nerve to say things like, "We're more authentic than real Indians." The implication is that authenticity means emulating Indians of the distant past accurately.

I wouldn't be surprised if this guy was the same. He thinks being "Apache" in costume is cool because of the imagined mystique (warrior...wolves...nature...eagles!). If he has a connection to anything Native of the 20th or 21st century, it isn't obvious. 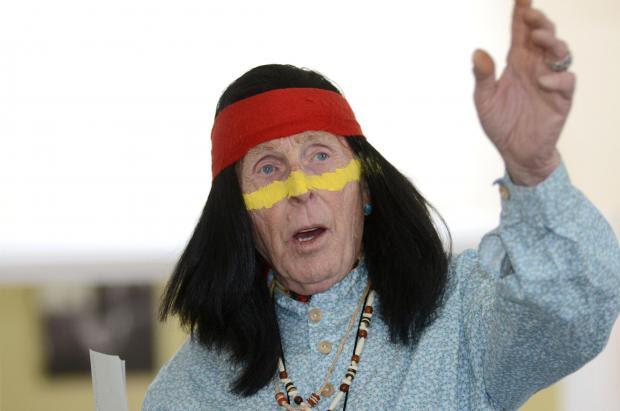