By Ajinur SetiwaldiComment:  Carstarphen has it exactly right. "The media is a powerful force in the development of ideas and images"...bingo.

For more on the subject, see Why Tonto Matters and Thousands of Indian Movies and TV Shows.

Below:  The mass media teaches a generation that Indians are secondary and servile to the white man. Note that it doesn't matter which tribe Tonto comes from or whether his costume is authentic. The overall Native theme is that Indians are less important than whites. And that's something most viewers won't question as a fiction. 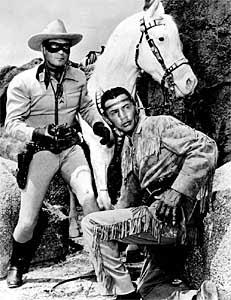