Debbie Reese writes about a Mt. Rushmore book in her American Indians in Children's Literature blog: 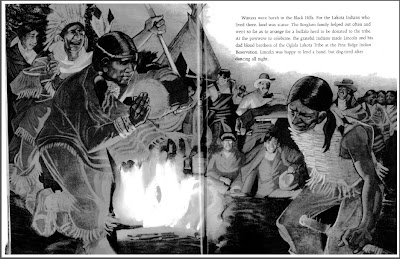 Here's the text for the page:Notice that it's all about how the great white man helped the poor Indians. Even if the incident happened, it's misleading in this context. It may be relevant to a Borglum biography, but it's not relevant to the taking of Mt. Rushmore.

What were the political and economic pressures on the Lakota to give up their land? How did they respond to these pressures? Overall, what were their feelings about the Mt. Rushmore project. The book apparently doesn't answer these obvious questions.

Here's what the Wikipedia entry for Mt. Rushmore says about the same period:Instead of this sobering information, the book gives us happy talk about grateful Indians. The implied corollary practically writes itself. "The Indians were so glad to be fed that they gave up their land willingly. It was a small price to pay for the white man's generosity."

As Reese observes, the all-night dance around a campfire is straight out of an old Western movie. She's never seen or heard of a genuine dance like this and neither have I. It looks like pure stereotyping: Indians as savages who express themselves with primitive actions rather than sophisticated words.

In short, Hanging from Jefferson's Nose is another in a long series of failed children's books. For more on Indians in children's literature, see Indian in Worse than Rotten, Ralph and Playing Indian in Not Me!