Mizuo Peck in Night at the Museum

Mizuo Peck is Sacagawea in 'Night At The Museum'Coogan and Caesar may be different ethnicities, but they're the same race. And since Rome once ruled most of Western Europe, including Britain, it's fair to say their ethnicities overlap. Many of Coogan's ancestors probably had Roman blood.

In other words, this writer's argument is pretty weak. Here's a Native writer's rebuttal:

Tara Beagan presents a Native American PerspectiveAnd:Comment:  Mizuo's magic may not be "just her beauty," but I'm guessing that's about 95% of the reason she was chosen. With her delicate face, she's got none of the "ethnic" features a Native woman might have. As Beagan indicated, she looks like Hollywood's fantasy of an Indian princess.

Beagan could've made her argument even better. Consider all the historical figures in the Night in the Museum franchise. Were any of the white figures played by people of other races? I don't know, but I'm guessing not.

If not, why not? Why not have a black woman play Amelia Earhart or a Chinese man play Teddy Roosevelt? Heck, why not get Denzel Washington to play Earhart and Lucy Liu to play Roosevelt? Do you want the best actors possible or actors who are "politically correct"--i.e., race- and gender-appropriate?

Would anybody object to these choices? Of course they would. White people are played by white people because they're the norm. You don't tamper with something that "everyone knows" is right.

Only exotic "others" (e.g., an Egyptian or Sacagawea) get cast as if their race doesn't matter. To most Americans, a Japanese woman is as "foreign" as a Native woman. Because they're not (white) like us, the details don't matter. One brown-skin is as good as another.

Night at the Museum embodies an attitude we see whenever non-Natives are cast as Natives. We might call it the "They all look the same to me" attitude. Needless to say, it's racist. 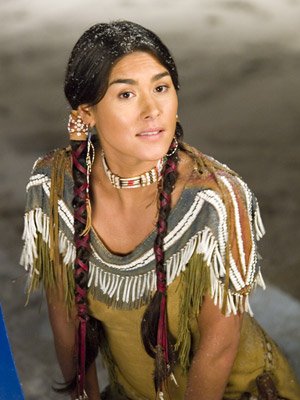 It'll just be cool to see how the characters interact. I'm guessing Darth Vader betrays the bad guys at the end.

are they FREAKING KIDDING??!!!

Remember the Steven Seagal film, "On Deadly Ground?" I had hope that after that professional film makers would not make such a distasteful "whitewashed" casting decision.