By Jessica YeeAnd:Comment:  I don't think I've reported on the Big Foot ride before. That's because it's more of an internal Native commemoration than an external pop-culture affair. But with Yee talking about how she and others are riding instead of celebrating Christmas, I figure it finally qualified.

Incidentally, it's okay with me if we give twentysomethings like Yee the power to get things done. Who do you think's going to accomplish more: 20- to 30-year-olds who are optimistic, energetic, and tuned into the Internet and new media, or 50- to 60-year-olds who are set in their ways, burdened with responsibilities, and unfamiliar with the latest technology. If I'm choosing sides, I'll be sure to pick a lot of youngsters for my team. 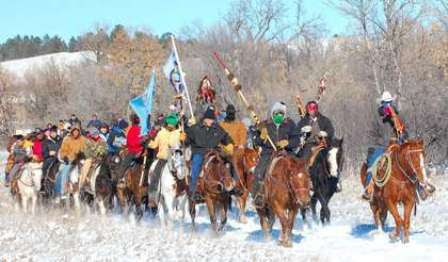