By Peter d’ErricoComment:  This is a nice rebuke to Obama's wish in his Inaugural Address: "that the lines of tribe shall soon dissolve." Secretary of Defense Gates thinks tribes could help establish stability in Afghanistan.

At the time, people claimed Obama was talking about "their" tribes--e.g., those in Muslim countries--and not "our" tribes. But d'Errico puts that distinction to rest. The foreign exploitation of Afghan tribes resembled the foreign exploitation of American Indian tribes. Both sets of tribes weakened or fell apart, which led to factionalism and violence among tribal members. Re-establishing the tribal structures of culture and religion is needed to rescue people from chaos.

So Obama's words do apply to American Indian tribes and he was wrong to utter them. And Steve Russell was wrong to claim this was the dumbest dispute since "niggardly." Wherever tribal cultures are threatened, we need to strengthen them rather than weaken or dissolve them.

To be sure, the wrong kind of tribalism--intolerant and xenophobic--is no good. But tribalism as a concept is more or less neutral. Depending how it's implemented, it can help or hurt.

Tribalism basically means uniting with like-minded people for a common purpose. When we talk about building communities or strengthening local governments, that's tribalism in action. People who play by the same rules, look out for each other, take pride in their neighborhoods--that's what we're talking about. This kind of tribalism is important, even necessary, for society to work.

For more on the subject, see Tribalism in Dreams from My Father and Natives Criticize Obama's Speech.

Below:  Good and bad tribalism. 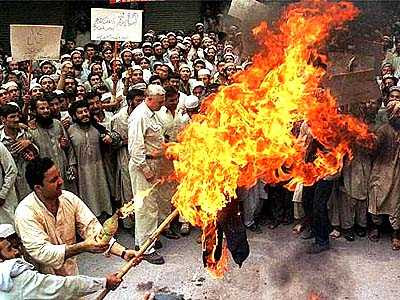 Thanks for your riff on my column! What you say about 'tribe' as community also sheds light on why gangs form. No surprise that kids in broken societies form their own 'tribes,' though they may also be dysfunctional as you point out.

How do you keep a people down? ‘Never' let them 'know' their history.

The 7th Cavalry got their butts in a sling again after the Little Big Horn Massacre, fourteen years later, the day after the Wounded Knee Massacre. If it wasn't for the 9th Cavalry Buffalo Soldiers, there would of been a second massacre of the 7th Cavalry. Read the book, “Rescue at Pine Ridge”, and visit website/great military history, http://www.rescueatpineridge.com