Billy SmithSome thoughts on this character and skit:


What it tells us

Saturday Night Live gave us a modern Indian character, which is still rare enough to deserve praise. But Billy Smith's quirks were enough to undercut any positive impact.

In addition to his speaking style, Smith's comedy routines are offputting. He comes across as a yokel who doesn't understand his urban audience. He uses odd Native words and cultural references and is surprised when listeners don't get them.

Apparently he's lived a sheltered reservation life and has little inkling of the wider world. Which is strange for a comedian who presumably plays the club circuit around the country. It's as if a Jed Clampett or Gomer Pyle left the boondocks to make his mark in comedy.

Even though this Indian looks and acts modern, he's woefully out of date. A 1960s Indian who left the rez might try these incomprehensible jokes, but today's Native comedians are as hip as anybody else. Which isn't surprising since they live in cities, drive SUVs or mini-vans, and run their own websites.

SNL left the impression that Indians are getting another government handout, which is bad enough. It also implied they're living rural, traditional lives that are out of touch with reality. I.e., they're stuck in some primitive backwater where things like computers, cellphones, and iPods don't exist.

This skit is better than nothing, I suppose, but not a whole lot better. Shows like SNL can do much better. Put Charlie Hill or JR Redwater on the show and you'll see what a real Native comedian is like.

The rest of the show

In his opening monologue, Lautner mentioned playing a werewolf in New Moon but didn't say it was a Quileute Indian werewolf.

In the inevitable Twilight skit, Lautner played a teenage girl on "Team Edward" who argued with another girl on "Team Jacob." Again they didn't mention that the werewolf characters were Indians. Lautner looked suitably girlish in a long black wig, which viewers noted when he played an Indian boy in Twilight.

Anyway, Lautner showed a lot of charisma as well as some impressive martial arts moves. He probably deserves to be a budding star. In a few years he could be a leading man and action hero a la Tom Cruise. I could easily see him playing a Jackie Chan kind of role.

Good for him...but as I said before, a Native actor could've and should've been in this position. Hosting SNL, headlining the Tonight Show, getting starring roles such as the upcoming Max Steel. In other words, taking Hollywood by storm.

Just imagine if a Native actor were one of the hottest properties in the world. It could've triggered a paradigm shift in our perception of Indians. From isolated and out-of-date (Billy Smith) to cool and sexy (a Native in Lautner's place).

For more on the subject, see Quileute Werewolves in Twilight and TV Shows Featuring Indians.

Below:  Taylor Lautner as a cute Indian boy or girl. 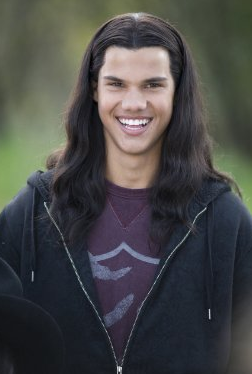 "Maybe some Indians talked this way in the past, but nowadays an Indian accent is rare. Indians pretty much talk just like everyone else."

I'm sure it's rare, but I have noticed quite a few Indians speaking what I call to myself a "Native American Accent." It's nothing like Tonto-speak, or Smith's accent. But I've only ever heard Native Americans using it.

Trying to think of an example of it in a movie anyone has seen, the Native character in "Legends of the Fall" (played by Gordon Tootoosis) might have spoken it, but I'm not sure and it is a long time since I've seen the movie. I'm rather sure I detected this accent with Kenny Pheasant, an Odawa actor and educator who was in a movie none of you have ever seen.