The Legend of Tillamook's Gold

By Elliot V. KotekComment:  Kind of funny how the film's producers went from a dark poster to a light one. The new poster is so suffused with sunshine that Suzanne Marie Doyon has changed from a brunette into a blond.

I don't think either poster is great, but at least the old one hints at something dark and interesting. The new one screams "feel-good Afterschool Special with a heartwarming message."

Anyway, I haven't seen this movie. Sounds like it includes heavy doses of Indian mysticism and a wise elder (Floyd Red Crow Westerman). I'll have to see it someday. 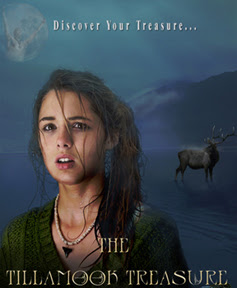 I've seen this film and wasn't sure what to expect. It is really good. I was impressed by Max Gail's performance, along with the music chosen for the movie.