A few weeks ago I posted this link on Facebook to illustrate the scary stupidity of some conservatives:

Conservapedia:  E=mc2 Is A Liberal Conspiracy

This led to the usual wasteful debate with critic Michael Cooke:Actually, my college education deepened and strengthened my nascent opinions from high school. And if I had doubts about e=mc2, I'd check it with multiple sources. As I do with most things, which is more than you can say.How many times are you gonna ask if I know what confirmation bias is, dumbo? Didn't you read my answers the last ten times you asked the question? How many times do I have to explain that I know what it is and knew it when you were in junior high school? Learn to read, you freakin' nitwit.

Conservative students tend to major in such subjects as business and engineering. These don't give them any insight into the issues I usually discuss: politics, culture, race, Native Americans. So in general...no, they don't deepen and strengthen their knowledge of these subjects in college.

I provide the evidence from the sources I've checked. You don't. As far as I can tell, all you check is your own addled opinions. Next time you "check multiple sources"--I mean, other than the voices in your head--prove it by citing and quoting them. Put up or shut up.

Confirmation bias affects everyone...equally?Naturally, you ducked the charge that you've asked me about confirmation bias many times already. Because you're an intellectual coward, I presume. The next time you ask me if I know what confirmation bias is, I'm going to delete your worthless comment. I'm not spending another second on your time-wasting repetitions. If you're literally too stupid to remember our previous conversations, I'm not.

I'm not debating the existence of confirmation bias, Mikey. I'm telling you it's a variable, not a constant. Big, big difference.

Your asinine insistence that no education is equal to any education is evidence that you don't understand what confirmation bias is. It's a psychological tendency, dumbo, with different strengths in different people. It's not an immutable fact of nature that affects everyone the same like gravity. Judging by your ignorance about stereotypes, it "colors" your uneducated opinions a lot more than my educated ones.

Incredibly, you think confirmation bias makes it impossible to learn anything by studying or searching for information. In other words, you're using an impressive word to justify your continued ignorance about everything we talk about. Did you mommy or daddy tell you to bray "confirmation bias" whenever you were too dumb or lazy to look something up? You use the excuse so often that I suspect that's the case.

I recognize the confirmation bias in the typical conservative education of business or engineering. Fortunately, a liberal arts education like mine exists precisely to teach students critical thinking. To force them to weigh conflicting ideas and come to their own conclusions. That's what I did when I read the works of philosophers, theologians, historians, and political scientists whom I didn't agree with. It's called education, Mikey--a concept you still haven't proved you understand.

Your belief that an education must change someone's beliefs is more evidence that you don't understand confirmation bias. If I have factual knowledge about something--e.g., math or science--more education won't necessarily change my mind. For instance, a mathematical formula either is or isn't correct. It's not a subjective belief and there's no bias involved.

Since I have an MBA as well as a BA and MA, I don't know what failure you're talking about. Unless you count a "C" in accounting, I didn't fail at anything in my 20 years of formal education (kindergarten to grad school at the University of Chicago). Like many subjects, I know more about economics than you do, which is why I chuckle at some of your naive economic proposals.

Lifelong debts? You must be thinking of yourself, Mr. Unemployed. I paid off my school debts about 20 years ago. Including my condo, I'm worth six medium-sized figures. How about you?

If you're talking about yourself, you haven't learned anything about Native Americans. Not from your "relationships" or anything else. And I'm not convinced you're not a racist, either. Given your constant defense of racism and stereotyping, you might as well be one.

Why is this subject relevant to this blog? We see confirmation bias at work constantly when we debate political or cultural issues in general. And when we debate Native issues such as mascots in particular. If any mascot lovers have researched the history or practice of mascots, I haven't met them.

No, people like Cooke revel in their ignorance. Cooke thinks education is a "filter" the way Sarah Palin thinks the media is a filter. Any information going through the filter is biased and therefore incorrect. But uneducated opinions like theirs are unfiltered and therefore correct.

In other words, it's 1984 all over again. Ignorance is Knowledge. And Knowledge is Confirmation Bias. Nice trick if you can get away with it. Too bad you can't.

For more on Cooke's ignorance about education, see Educational Value of Blogging and Rob Should Fight Poverty?!

Below:  Typical Native stereotypes. Cooke "knows" these stereotypes aren't harmful because anything that proves they are harmful is just confirmation bias. 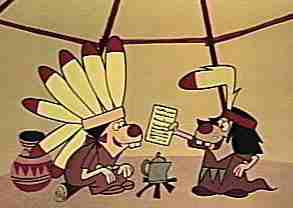