Below:  "San Felipe Pueblo leaders take part in a May 6 groundbreaking ceremony for a youth soccer field with NB3 founder Notah Begay, far right. The collegiate-size field was recently completed and will serve the pueblo’s youth soccer club." (Photo courtesy of the NB3 Foundation) 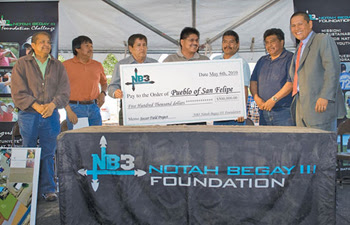