By Rupa ShenoyAnd:Comment:  For more on Native tourism, see Aboriginal Kiosk at Tourism Center and Tahlequah as Art Destination.

Below:  "A view of the one-mile stretch of Franklin Avenue in Minneapolis that organizers hope to turn into the country's first Indian cultural corridor." (MPR Photo/Rupa Shenoy) 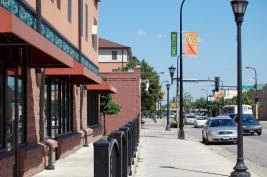 "Is this a sincere attempt to better Minneapolis' NDN community, or is it just the re-branding of a Red Ghetto? How much of the real estate in the Franklin Ave. area is actually NDN-owned? Are the NDN-owned businesses to only be conducive to tourism? Will the Red Lake Embassy have anything to do with this community/project? Are other Minnesota tribes backing this idea? These are questions I'd love to see answered."

Your guess is as good as mine. The only info I have is in the article.

For more on the subject, see First Mural in Cultural Corridor.