The value of indigenous knowledge

Last of Their Kind:  What Is Lost When Cultures Die?

The world's cultures have been disappearing, taking valuable knowledge with them, but there is reason to hope

By Wade DavisComments from the peanut gallery

Some comments on this article:Rob weighs in

The Barasana's knowledge has proved its worth. I imagine the Polynesian knowledge could contribute to oceanographic research, meteorology, navigation, and related fields.

A few comments on the comments:

Zi says old things "have to die." But when SDahal challenges him on this, Zi backtracks and says babies shouldn't be thrown out with the bathwater. In other words, old things must go unless they're valuable, in which case they can stay. So Zi foolishly misspoke and SDahal rightly corrected him on it.

We can't "packrat" everything into the future? Hasn't Zi heard of libraries and databases? With lour terabytes of data storage nowadays, we certainly can packrat everything. It's idiocy to suggest that we can't or shouldn't study the past and preserve the results. "Those who do not learn from history are doomed to repeat it."

Outsidethebox's comment about cultures--"They were failures at surviving"--may be the stupidest thing here. Does that also apply to the 9/11 victims? They didn't protect themselves from a murderous attack, so they were failures. Survival of the fittest means Al Qaeda, not the losers in their ivory Twin Towers.

If "surviving" is your criterion, the civilizations of Egypt, China, and India have survived the longest. Unless you count the indigenous cultures that have survived for 10,000 years or more. They've all survived much longer than the United States, which is an infant among nations.

Moreover, the US couldn't defeat Vietnam, was terrorized on 9/11, and is failing in Afghanistan. Maybe we should switch to an Egyptian or indigenous model pronto since the evidence of our failures is all around us.

Frgough's "superior cultures will dominate and eliminate inferior cultures" is equally stupid. So the Nazis dominated and eliminated the Jews because the Jews were inferior? Great, let's all become Nazis. We can toss the Constitution and enshrine "might makes right" as our guiding principle.

For more on the subject, see Victor or Victim:  Our New National Anthem?, The Myth of Western Superiority, and Multicultural Origins of Civilization.

Below:  "Barasana people of the Northwest Amazon of Colombia believe that man and nature are one. Their philosophy of interconnectedness has given rise to land management practices that minimize the impact of the Barasana on the environment. In 1991 the Colombian government granted the Indian peoples of the Northwest Amazon legal land rights to an area the size of the U.K. Thanks to that decision, the once endangered Barasana are experiencing a powerful rebirth. They are among the rare lucky ones." (Wade Davis) 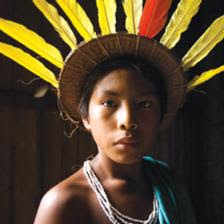