A good summary of the Native position on the Tea Party movement:

By Elizabeth Cook-LynnComment:  Yep, Ms. Cook-Lynn has nailed it. We didn't hear one word from these people about taking about America until we elected Obama. Are we seriously supposed to believe the country has gone wrong since Obama took office in 2009? The Bush wars, deficits, and recession continue at roughly the same levels, so what's the big change?

Oh, yeah...a black president is signing legislation that may hurt rich white people (financial regulation) and help poor brown people (healthcare reform). We can't have that. Let's take back the country...from the blacks, Latinos, gays, atheists, and others who are trying to take it from us.

For more on the subject, see Angry White Christians Want Country Back and White Conservatives "Angry About Racism." 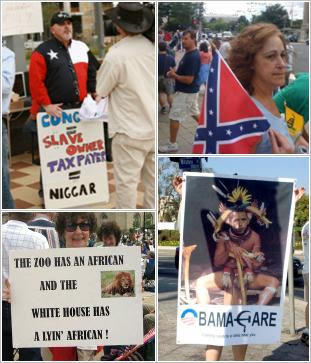