By Juan ForeroSome of the evidence:Comment:  Not only does this evidence discredit old scientific theories, it discredits old Native stereotypes. And stereotypes about Amazon Indians are among the most persistent. Convincing people that North America's Indians had art, science, and culture seems easy compared to making the same case for Amazon Indians. How many jungle movies have we seen portraying them as savages, headhunters, and cannibals whose only technology is how to kill people creatively?

The evidence also suggests that the movies portraying lost jungle civilizations have some basis in fact. But these lost civilizations didn't build massive temples so they could sacrifice people to their dark gods. They built farms, irrigation systems, and villages of wooden structures.

When you see a movie such as The Librarian: Quest for the Spear, think about it. Where did the stones for a massive temple come from, and how did the Indians lug them through the forest? Answer: They didn't. It's illogical, and it implies the Indians were too irrational to understand the time and energy they were wasting. In reality, they had better things to do than build temples for Indiana Jones types to discover.

For more on the subject, see What "Primitive" Indians Really Think and Amazon Towns Disprove Stereotypes.

Below:  Historically speaking, the exception, not the rule. 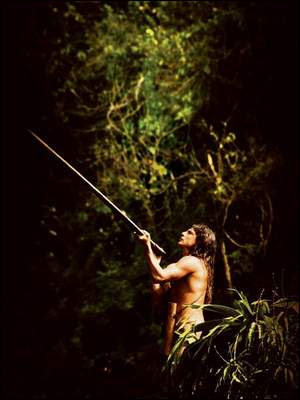 I wonder if this Onion article was written in direct response to this article. It's a pretty decent parody and I noticed too not once did they use the words Indian, Native, or indigenous.

I saw that piece too. You could be right about its being a response.

For more on the subject, see Worst Indian Civilization Ever?