DJs learn not to satirize Natives

When the conflict is race, don't feed the fire

By Julia O'MalleyAnd:And:Comment:  "You can't satirize a culture"...wow, brilliant deduction, Sherlock. After a century or two of minstrel shows and other racist "satires"...followed by 30 or 40 years of their being socially unacceptable if not taboo...you finally figured that out? What was the big clue? The last episode of Good Times fearing JJ Evans as a black buffoon? The last episode of Get Smart featuring a Charlie Chan knockoff? The last episode of F Troop featuring a comical Indian tribe?

This incident shows you what we're up against. People who don't consider themselves racists, who wouldn't think of satirizing blacks or Latinos, somehow think Indians are fair game. It's as if they can't think straight on the subject.

Intellectually they seem to know that Indians still exist. But in their hearts, they consider Indians to be what they've seen in movies, TV shows, cartoons, books, and paintings. These imagined Indians have no thoughts, feelings, beliefs, or values. They're the sum of what one can see--feathers, buckskins, tomahawks, and warpaint--and nothing more. They're basically two-dimensional cardboard characters--like sports mascots or product advertisements--not three-dimensional people.

"Me stoic Injun chief. Not real person, just big-nosed cartoon. Go ahead and make'um fun of me. Me no care." 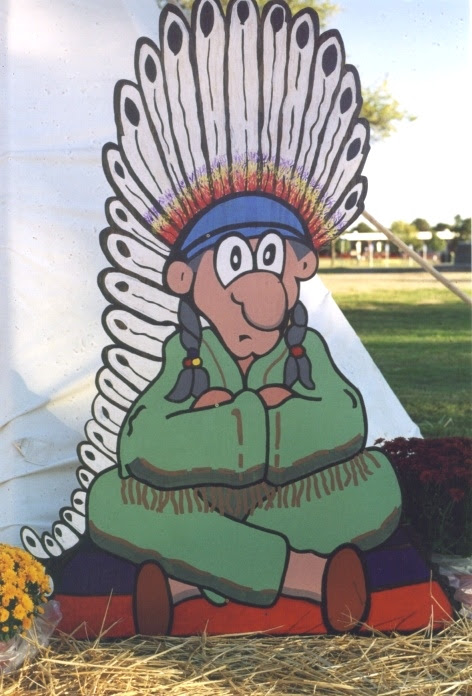 Our thought patterns mirror what we've seen and experienced. For every impression that tells us Indians are real, a thousand impressions tell us they're primitive people of the past. Why would anyone expect one true impression to dominate a thousand false impressions? Even if you "know" better, as these DJs supposedly did, that's not how the human mind works.

This may explain why the Quileute werewolves in Twilight are so appealing. They have no culture, religion, or history to make them real, so you don't have to think about them or their plight. Like their vampire counterparts--or the Smurfs or the Simpsons--they're just colorful pieces of fiction. Cartoon characters. You can't hurt Wile E. Coyote by abusing him, and Indians are no different. Or so people think.

For more examples of radio "humor," see DJs Lampooned Makah Whalers and DJs Whoop Over Running Bear. For more on the subject in general, see Background Research on Native Stereotypes and The Harm of Native Stereotyping:  Facts and Evidence.

Below:  "Bob Lester talks about what he's learned from a working group on race relations, after an on-air skit offended some in the Alaska Native community."

Haven't these racist ofays of the lunatic fringed, had enough already? Enough of pissing everyone off? When is "enough is enough"?

First, they're bashing Hispanics on a much broader scale(the factor is immigration). Then they're still spouting off racist hyperbole about our first "Black President" and Black people in general. And of course--there's the Native.

Its sort of, as if these KKKrackpot nudniks have very very poor self-esteem. So they retort to juvenile racist satire of non-Whites.
Psychologically speaking, my only presumption is that these sort of mouthpieces hath no self-respect. That's a low down dirty shame.

Its a good thing, knowing that there are folks out there, taking direct action in addressing this problem. Forget the "sensitivity training". What they need is a "teachable moment". We need to keep the pressure on our racist enemies.

I agree GENO, but after having a few hundred years of "supremist" and privileged ideology crammed down ones throat and taught since birth that the world is flat, Americans are a well programmed society, how else could a man like Bush get into the White House or a man like Nixon not see the err in stating, "Its not illegal if the president does it!"

This is why this site is so valuable.

We must educate and re-educate ourselves on just what is the truth and what is fiction in America and unfortunately the truth may not be as tasty as apple pie, smell as good as roses or look as pretty as Miss America.

I also believe that Rob is ahead of his time. Before the soul and spirit of America can claim itself as a viable force or power on the globe besides having the braun without the brains, the first people must be fully understood, and heard.
Until then, how does anyone truly claim real birthright, or ownership without respecting the land one walks upon or is buried into?

Bush getting into office had nothing to do with race. His opponent, after all, was at least as much a member of the white American aristocracy as Bush was. (Fact. Gore was a Jr. while Bush was not.)

He got my vote, and the votes of half of the voting population (and much more than that the second time!), because we felt he had better ideas for the country than the other guy did. Not because of hundreds of years of supremacy and privilege ideology.

[Nixon saying] ""Its not illegal if the president does it!"

Ah. An earlier version of Gore claiming he was above the law with his "no controlling legal authority" statement. Or Clinton refusing to turn over papers under subpeona because he too was above the law.

Getting away from Burt's blindly partisan name-dropping, I agree with Geno's rant. Racists deserve only strong derision. Never let up.

Gore was saying he didn't violate the law, not that he was above the law. And it was a situation involving his personal ethics, not the nation's constitution. Not even close to being the same thing.