Dancing to support gay rights or oppose police brutality is all part of the routine for the hardest-working group in Southern California's leftist protest circuit.

By Hector BecerraComment:  For more on the Aztecs, see Humboldt Republic's "Chief Life" T-Shirts and Aztlán the Board Game. 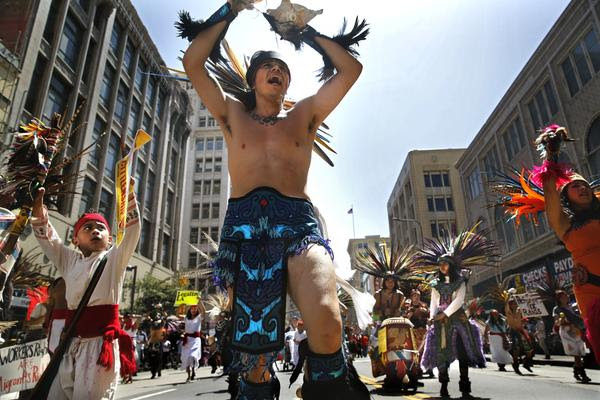 One part of it is, the Aztecs of today are more than aware that cutting people's hearts out isn't the only thing keeping the sun alive, and that in fact that thing has another 5 billion years to go.

And it's good that they weren't "peace-loving lotus-eaters". I hate lotus-eaters, imagining the perfect world and doing nothing to bring it about. Nothing is worse than inaction.

(Too bad about the mention of Guevara. He was fairly paternalistic to the Congolese.)

Guevara was a man in the mold of Columbus. He heralded a new wave of European colonial brutality in Latin America. He is actually on record saying that the Soviets weren't brutal enough. And why make a liberal icon out of someone who proposed putting gay people in death camps???

Che is an emblem of extreme genocidal fascism.

Anon: Yes, of course. The Soviets were the last, and one of the worst, European colonizers. The "paternal" aspect they presented to those they perceived as racially inferior was obvious.

Everybody has commemts on us, Aztlan Mexica Nation, yet they are always misconstrue in there views on us. We never sacrefice anybody, we don't were costumes or pretend to be something we are not. We are Not hispanic, latino or latinas, nor anglos. We are the true soveriegn people of this land proud Mexicas true warriors showing who we are in our clothes