As Biden speaks at event named for Old Hickory tonight, more appalling stories show party should dump him as icon

By Steve YoderAnd:And:Comment:  Jefferson wasn't all he's made out to be, either. He owned slaves and wanted the Indians removed, making him Jackson's spiritual father. He's not a great fit with today's Democrats, since he favored small government and opposed big spending projects.

But the Jefferson-Jackson Day dinners are pretty weak evidence of "liberal racism." As the article indicates, most Democrats probably accept the name without thought. As with a dubious sports team nickname or geographic place name, inertia is largely responsible for keeping it in place.

It's like using a $20 bill with Jackson's picture on it, or driving on a freeway named for Jackson. Most people don't even think about it. Even if you cared, it would require a lot of effort to avoid Jackson's name and image, and it wouldn't have much effect. So I don't blame people for ignoring his presence throughout our culture.

That said, this name is something party leaders can easily change without harming anyone's sensibilities. "Roosevelt-Kennedy" does indeed have a nice ring to it. Or Democrats could abandon the "two presidents" convention and call the event something else. Maybe the Power to the People Dinner or the Ninety-Nine Percent Dinner.

For more on Andrew Jackson, see Most Overrated Presidents and "Most Terrifying Man Ever Elected President" 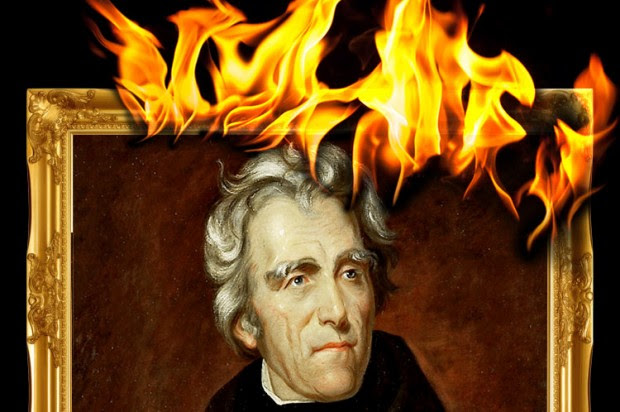 "But the Jefferson-Jackson Day dinners are pretty weak evidence of "liberal racism." As the article indicates, most Democrats probably accept the name without thought."

Now, this is a weak argument I think. Isn't "accepting without thought" one of the defenses used for racism? It could be used, say, as an argument to keep the R*skins football team name. After all, the vast majority of the fans of the team accept it without thought, right?


Would you call someone promoting