Winona KirkComment:  I knew I had read something about Kirk's Indian heritage, but I couldn't remember where. It was in these novels, all of which I've read. Thanks to correspondent DMarks for bringing this matter to my attention.

Memory Alpha and Memory Beta both claimed author Diane Carey named Kirk's mother Winona in Final Frontier. Not so: Vonda N. McIntyre mentioned Winona and Kirk's Sioux ancestry two years earlier in Enterprise: The First Adventure. I don't know if McIntyre was the first to use Winona, but she preceded Carey.

I'm guessing McIntyre knew that "Winona" is a Sioux name meaning "first-born daughter" or "eldest daughter." We learned a bit about a previous Winona in The Myth of Princess Wenonah. Clearly someone knew Indian lore in making Kirk's mother part Indian.

This discussion is a good excuse for reviewing the new Star Trek movie, which I saw this afternoon. Alas, it was good but not great. A lot of fun, but not what I'd call real Trek. I'd say it resembled a young tribute band pretending to be rock legends.

For Trek fans, the movie had a ton of problems. Almost every one of the criticisms in these reviews is spot-on:

In The Racialicious Roundtable For ‘Star Trek’, several young critics note how "hot" the young actors are. Among these critical chestnuts are a few gems:Rob's review [spoiler alert]

You can find plenty of reviews that tell you what was good about the movie, including some of the above. The first third of movie that introduced the characters was fine. Once they boarded the Enterprise, however, problems started cropping up.

Here are some of the movie's worse flaws:

As for the characters...not only was Karl Urban's McCoy the best, but he was the only actor doing the right thing. Everyone else was doing their (or Abrams's) impression of how the characters should be. E.g., Spock as an angry young man whose logic barely masks his emotions. Only Urban was trying to give us the, er, real McCoy--i.e., the characters brought to life by the old cast members.

Below:  The real Kirk acting out his Sioux side. 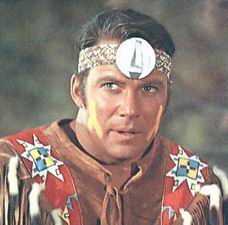 Kirk's mother's Sioux descent is perhaps considered to be ephemeral information. In any case, it obviously was not considered in casting Winona Kirk in the new movie. But they did keep her Sioux-derived first name.

Trek XI is so much like Star Wars that Collegehumor made a video comparing the two.

Star Trek and Star Wars shouldn't cross. When they do, you get The Crystal Star.

The problem with the "Death Star" comparisons is that you have a lot of precedent in "Star Trek" itself, with multiple doomsday ships/devices in the movies and even the old-series TV episodes.

Likewise, there is precedent for Kirk getting angry over a bad guy killing his relative.

I think most of the old Star Trek villains were better conceived than Captain Nero. He went back in time to Kirk's birth, then sat around for two decades to get revenge on Spock? Ridiculous.

What about all the times Spock saved the entire galaxy, including the Romulans? If Nero kills Spock, maybe Khan or the Kelvans or the Borg conquer the Romulan Empire. It's stupid to tamper with two centuries of history for the sake of vengeance.

It's not as if Spock destroyed Romulus. Rather, he singlehandedly tried to save it. How about blaming everyone who didn't try rather than the one person who did try?