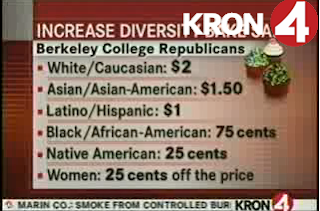 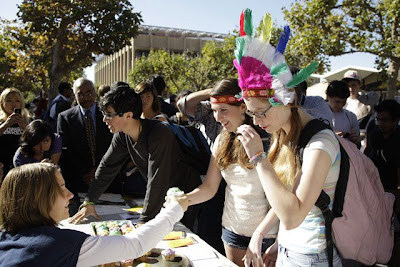 I haven't heard anything about women getting affirmative action in college admissions. Sounds like these College Republicans are anti-women (shocking, I know).

I don't mind the concept of using race or satire to criticize racism. And I think some of the critics' arguments--that this trivializes or "humourizes" a serious issue--are weak.

As with most race-based satires, though, this stunt misses the mark. Tim Wise nailed the problem with it: It isn't even remotely similar to the real-world situation.

Let's suppose affirmation action did more than just "consider" race as an admissions factor. Let's suppose people got guaranteed "discounts" for belonging to a certain minority. It wouldn't be anything like 50% off for Latinos, 62.5% off for blacks, and 87.5% off for Natives. It would be more like five or ten cents off the $2.00 admission "price."

And that ignores the whole point of affirmation action, which is to compensate for the past effects of racism. Let's take a typical Native case. Your great-grandparents had their land, water, and natural resources--their immense wealth--stolen from them via a broken treaty. Your grandparents were forced into a concentration camp--a reservation--where they had to adopt an incomprehensible way of life. Your parents were kidnapped, imprisoned, and brainwashed in a boarding school similar to a Communist reeducation camp.

Because of all that, you were born and raised in an environment of poverty and crime. Your parents may have been unemployed, abusive, or absent. Your education and health care were inferior. Yet despite these obstacles imposed by Americans, you somehow persevered and succeeded. Now you're applying for admission at the University of California.

If a college education costs $2.00, your family has had to pay perhaps $10 or $20 more than a typical white student to get to the starting line. And now UC is giving you a ten-cent discount because of your race? How is that not a fair and just remedy for society's historic racism? The racism that white students have benefited from whether they caused it or not?

When a bake sale captures all that in its pricing scheme, then it'll be a valid critique of affirmative action. Until then, no. This bake sale fails for that reason.

For more on the subject, see Whites Think They're Discriminated Against, "Symmetrical View" of Race Is Wrong, and Whites Feel Like a Minority.
Posted by Rob at 8:29 PM

College republicans have been hosting these events for years. My campus had one back in 2007.

What irks me is that they have the concept backwards. In an affirmative action sale, shouldn't the cookies representing the peole of color be worth MORE than the white people cookies???

Oh jeez, here all this time I've been paying my own tuition, tsk tsk.

Obviously veiled prejudice, and an insult to minority students. Those tacky feathers look terrible too, but what would you expect from the ignorant?

Caccat: Again with talking about colored people. Can't we move past this term and all its forms?

Rob said: "And that ignores the whole point of affirmation action, which is to compensate for the past effects of racism."

Actually, it has nothing to do with this. There is no consideration in affirmative action for the past effects of racism. It is an explicitly racist system that punishes people based on skin color alone. Not any past racism.

This is why the children of Lee Iacocca, whose white ancestors arrived penniless after the end of slavery, get punished in such a system, while the privileged children of Barack Obama, whose black ancestor arrived rather recently, get even more a boost.

The only just solution is to abolish all such racist policies.