Our celebrity-centered culture plunges us into a moral void. It offers the illusion of immortality and promotes self-love over the common good.

By Chris HedgesAnd:Comment:  Interesting that Hedges refers to indigenous cultures when he writes:If he's talking about the phony shamanism of New Agers and their ilk, I tend to agree. In other words, this worship of the superficial and phony leads to bad results.

How is Hedges's analysis relevant to Newspaper Rock? As I've said before, America has a cowboy culture. We celebrate the rugged individualist, and the cowboy is the epitome of that.

We don't honor other people who had equally tough jobs: farmers, miners, steelworkers, et al. We've made the cowboy of legend into a historical celebrity. He and his pioneering associates (Daniel Boone, Davy Crockett) are our national heroes.

In the same way, the Indian of legend has become a historical celebrity. Where the cowboy represents the mainstream culture, though, the Indian represents the counterculture. He's the celebrity of choice when you want to show how cool, hip, and rebellious you are. Indians fought the status quo and so do today's contrarians--at least in their own minds.

Thus we get students clamoring for their Indian mascots. Hipsters wearing Plains-style headdresses. New Agers and wannabes appropriating Native religion and culture. They're arguably all part of the same vibe, which goes like this:We see this most clearly when someone like Kesha dons a headdress and facepaint. She's practically screaming, "I'm not a two-bit pop star you'll soon forget. Look at me! See how daring I am to dress as an Indian? I'm a spectacle...a wild woman...a celebrity! I'm someone...remember me!"

Celebrities and (stereotypical) Indians are larger than life. They don't have to play by the rules. They're remembered for their greatness. Thus, Indian wannabeism = celebrity wannabeism. Not exactly, of course, but close enough.

For more on the subject, see Victor or Victim:  Our New National Anthem? and America's Cultural Mindset.

Below:  University of Illinois fans try to be something other than boring white people. I.e., to be brave and bold by proxy. "We're different...special...Indians!" 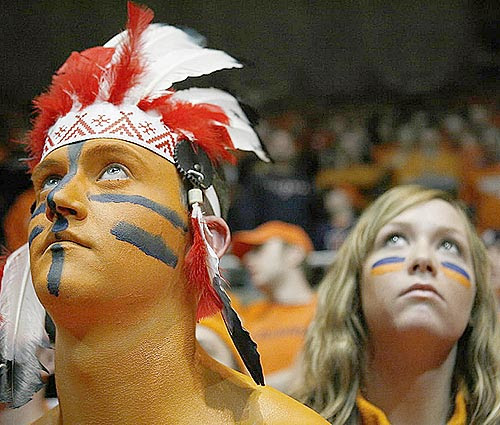 Funny, I would never have thought of the "Indian of legend" becoming "a historical celebrity" but in a way it all makes sense. The celebrity Indian really is larger than life, hence the allure for so many people.