Bolivians to punish thieves with amputation

Bolivian City to Castrate Rapists and Cut Off Hands of ThievesComment:  This doesn't sound like any Native justice I've ever heard of. Just the opposite, in fact.

It sounds more like a fundamentalist Christian or Muslim approach. I presume these Indians are practicing their traditional culture and religion, but perhaps they've converted to Christianity.

The traditional Native approach stems from viewing people as a mix of good and evil, I believe, not pure evil. Religious fundamentalists think differently, of course.

Does the penalty fit the crime?

Anyway, I could see chemical castration for rape, especially a second offense. I presume it can be reversed, so that's an advantage.

I can't see cutting off someone's hand. This is usually applied to relatively minor offenses by relatively poor people.

If you cut off a billionaire's hand when he cheated his company, his shareholders, or the public, then you might have something, but that'll never happen. Only the poor suffer under this harsh form of "justice."

It's also stupid because it doesn't resolve much. The victim doesn't get compensated for the stolen goods. The perpetrator probably becomes a burden on the taxpayer. And if the perpetrator is bent on stealing, he can hire someone to do it for him.

I guess this measure cows people into frightened submission, which doesn't sound healthy. And someone who doesn't like the repressive climate can go elsewhere, so the measures merely export the crime. Really, what's the advantage of making your society as harsh and unforgiving as Saudi Arabia? Does anyone except a rich sheik want to live that way?

For more on Bolivia, see Whitewashing in Quantum of Solace and Bolivia's Coke to End with Maya Calendar. 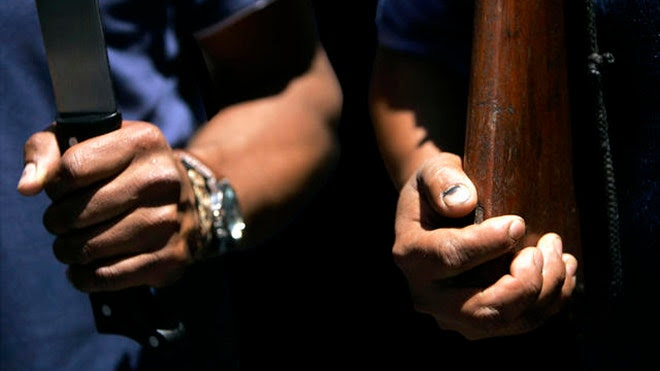 How asinine of you to juxtapose the Justice systems of Plains Natives with your lame idea that Bolivia's "Indigenous" does the same.

You're a real tool. It's no wonder why your articles rarely get cited. The "paraphrasing" racist that you are.

Isn't plains Indian justice more of a "banish them because they can't survive on their own" type thing?

"I guess this measure cows people into frightened submission, which doesn't sound healthy"

There are many other ways in which the Morales' government gives in to brutal fascism.

And it should be mentioned that the methods of determining guilt in this are no doubt Mafia-like as well, leaving a lot of innocent people maimed.

How asinine that you think talking circles and banishment are limited to Plains tribes, Shadow Wolf. Do you have any evidence for this ignorant assertion?

A brief Google search shows that Natives from the Tlingit in Alaska to the Maliseet in Maine use talking circles. The same applies to banishment.

As for your ridiculous claim that my "articles" don't get cited...I usually post excerpts of other people's articles, not my own articles. There's no reason to cite these excerpts and I don't expect them to be cited.

If people want to cite something, they should cite the original articles. Duhhh.

If you're as stupid as you sound, "like" means "similar to." Your focus on talking circles and banishment is irrelevant since I was talking about Native approaches in general.

I suggest you learn to freakin' read, dumbass, so I don't have to explain third-grade English to you. It would save us both a lot of time.

Good point that the methods of determining guilt are also likely to be crude and unfair, DMarks. But I don't attribute this to the Morales government. From what I gather, the government is merely giving indigenous regions some autonomy. It's their fault for taking this autonomy to the extreme.