Romney doubles down on his 47% comments. He really believes half the country, especially Indians and other minorities, are moochers who want government "gifts."

Romney, Ryan, O'Reilly and other GOP hypocrites are lying about the role of politics in American life

By Joan WalshFrom the 47% to ‘gifts’: Mitt Romney’s ugly vision of politics 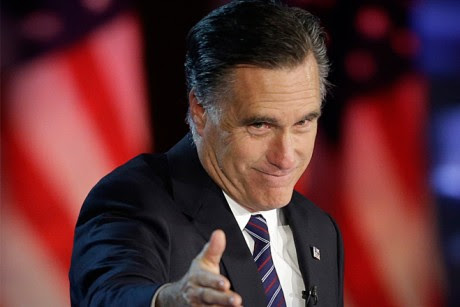 By James RaineyComment:  To reiterate the obvious, here's why most people voted for Obama:As a typical Obama voter, I can confirm this. I don't personally benefit from immigration reform, student loans, free contraceptives, gay marriage, and so forth. Other than getting a small rebate from my insurance company, I don't benefit much from Obamacare. I voted for Obama because these things are good for the country, not for me personally.

That Romney thinks this shows how stupid and out of touch with reality he was. His palpable disdain for half the country basically disqualified him from being president. Smart voters understood that, which is why they sent him packing.

What's especially funny is to hear Jindal, Gingrich, and other Republicans denounce Romney for his comments. Where were they when he said the same things in the infamous 47% tape? At the time, most of them said Romney was basically right and merely phrased his remarks poorly. Now that they're stuck with the biggest loser in recent history, the hypocrites are changing their tune.

That they criticize these "moocher" claims only when the election's over and nothing's at stake shows just how hypocritical they are. I'm guessing most of them still believe the Republicans' "moocher"-hating dogma. We know Gingrich, who labeled Obama the "food-stamp president," does.

The pundits above are too polite to note the corollary to Romney's remarks, but I'm not. Many conservatives equate the "moochers" who want "gifts" with minorities. Romney's claims are basically racist. If he isn't a racist himself--a dubious claim--he played upon the racism embedded in the Republican Party.

Even when he lost, he still told his conservative backers what they wanted to hear. White, middle- and upper-class Euro-Christians are the real Americans. Poor brown people are lazy, good-for-nothing bums. They're un-American because they won't work and sacrifice like white people to get ahead.

Of course, this is what whites have been saying about blacks and Indians since the beginning. It's entrenched in America's founding mythology. Euro-Christians created America for the "chosen people"--i.e., hard-working, God-fearing folks like themselves. Everyone else is a leech and a parasite trying to sponge off the whites' self-proclaimed greatness.

It's no wonder we heard so much about Obama's birth certificate and religion. These beliefs are consonant with the conservative worldview. And that worldview is fundamentally racist.

For more on the subject, see GOP America = Strives vs. Parasites and Romney:  47% Are Moochers.
Posted by Rob at 5:29 PM