After a couple days of controversy, Victoria's Secret apologized for its fashion faux pas:

By Lisa ScherzerVictoria's Secret apologizes for use of headdress

'They are spitting on our culture,' Navajo Nation spokesman saysReactions to the apology

Many commenters on Facebook weren't satisfied with Victoria's Secret's apology:Comment:  On the bright side, these controversies are getting a lot of (bad) publicity in the MSM. Once something goes viral on FB and Twitter, the rest of the world is picking it up. So keep up the good work, online activists!

It's amazing if you think about it. We've gone from major businesses (Cleveland Indians, Washington Redskins) ignoring criticism for 40 years to backing down and apologizing in matter of days, even hours. That's progress. 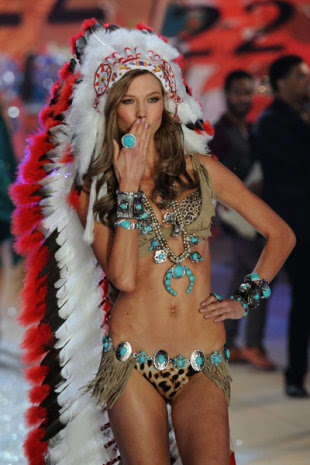